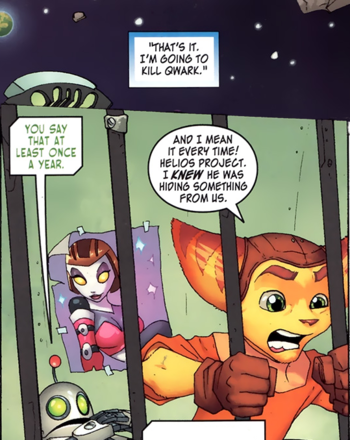 Characters make death threats that they never seem to carry out. It's not uncommon to have people say "I'll Kill You!" all the time, only to have fights that never quite go that far, only stopping at wounding and/or maiming. Granted, "I'll seriously wound you!" doesn't sound quite as badass (though even that can be pulled off effectively), but at least it's more threatening than a Strongly Worded Letter.

See Cut His Heart Out with a Spoon for other kinds of ineffectual threats (which may or may not be death threats). Arguably Truth in Television more often than not.

Compare We Will Meet Again and Empty Cop Threat. Contrast Prove I Am Not Bluffing where they make good on that word.

When the threat is realistic but not immediate, see You Have No Chance to Survive. Subsequently and more immediately, Prepare to Die.

The ensuing scene has Sanzo reassuring Hakkai that he's allowed to stay with the group, despite his previous sins. Death threats don't get more ineffectual than that.