Literature / All Quiet on the Western Front 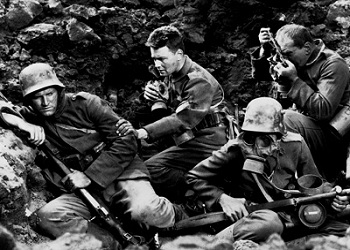 "This book is to be neither an accusation nor a confession, and least of all an adventure, for death is not an adventure to those who stand face to face with it. It will try simply to tell of a generation of men who, even though they may have escaped shells, were destroyed by the war."
Advertisement:

All Quiet on the Western Front (Im Westen Nichts Neuesnote Literally "Nothing New in the West") is a 1929 anti-war novel, set during World War I, by famous German author and war veteran Erich Maria Remarque. It's considered to be one of the greatest and most important works in the genre.

Many of the elements of the narrative correspond to Remarque's own experiences, and the book has strong autobiographical undertones.

All Quiet on the Western Front is narrated by a young soldier, former grammar school student Paul Bäumer. The horrors of trench warfare are described in a brutally realistic fashion. Further themes are comradeship and the soldiers' detachment from civilian life.

Remarque had actually written the book back in 1927, but it was first published two years later, due his difficulty in finding a publisher willing to publicize the book due to its controversial content. However; it would turn out to be a best-seller when it was first released. Initial German reaction was mixed, with reactionary Germans furious at this "disrespectful" "cowardly" and "treasonous" look at the German Army. Left-wing intellectuals, as well as many war veterans, on the other hand, praised the book highly, and its international reception was adoring, both for its excellent quality of writing and its stark look at the horrors of war. Nazis were less than pleased — believing the book would "soften" Germany, they added it to their list of proscribed books, and it was one of the first books to be burned publicly in 1933. They also spread several falsehoods about Remarque through propaganda, namely that his "real" last name was Kramer ("Remark" spelled backwards) and that he was from a Jewish background (both these bits of misinformation even made it into a couple of later biographies on Remarque). Remarque fled to Switzerland and later to the United States. In 1943, his sister was beheaded by the Nazis as a stand-in for him. They sent the 500,000RM bill for her imprisonment and execution to him.

In 1930, an American film adaptation was made, directed by Lewis Milestone and starring Lew Ayres as Paul. It won the Best Picture Oscar and is often considered to be the Trope Maker of the modern war drama. It is also quite possibly the first really great sound film, made after Hollywood spent a couple of years struggling with the new medium of talkies. It has a place on the National Film Registry.

A Made-for-TV Movie adaptation was made in 1979. A new film adaptation was in Development Hell since about 2008 until it was picked up by Netflix, and is due to release in 2022, starring Daniel Brühl, Albrecht Schuch, Sebastian Hülk, Devid Striesow and Edin Hasanovic.

All Quiet on the Western Front and its adaptations contain examples of:

Tropes particular to the 1930 film:

Alternative Title(s): All Quiet On The Western Front