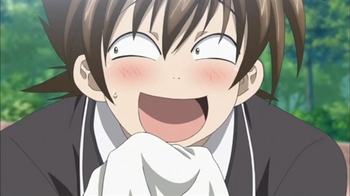 Exhibit A of a goofy pervy high school student.

open/close all folders
Anime
Season One