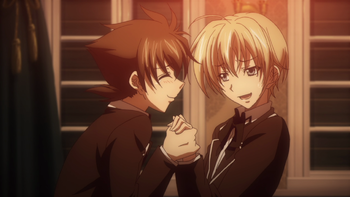 Kiba, sometimes you say nice things for a damn pretty boy! Note From Season 01, Episode 07: I'm Gonna Get a Familiar! Left: Hyoudou Issei. Right: Kiba Yuuto.
Despite the fact that the series is a harem series, somehow the author was able to sneak in a few of these. Hey, Issei's wish is to become a Harem King and no one ever said harems only needed to be from the opposite gender.