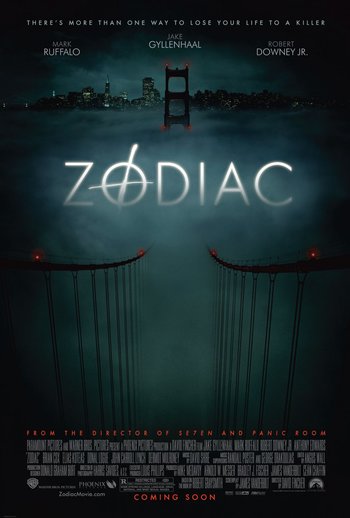 There's more than one way to lose your life to a killer.
Melvin Belli: I believe this is a window into this man's soul. Killing is his compulsion. Even though he tries to ignore it, it drives him. It's in his blood.
Inspector David Toschi: Could be, or maybe he just likes the attention.
Advertisement:

Zodiac is a 2007 film directed by David Fincher, based on the 1986 book of the same name by Robert Graysmith, chronicling one of the most infamous criminal cases in American history — the manhunt for the Zodiac Killer, who terrorized the San Francisco Bay Area during the late sixties and early seventies — from the perspective of three main characters:

Fincher and co. spent 18 months meticulously researching the Zodiac cases for the film, as he felt a burden of responsibility to dispel the mythical stature of the killer by separating fact from fiction, and even got the Zodiac Killer's only surviving victims as consultants for the film.