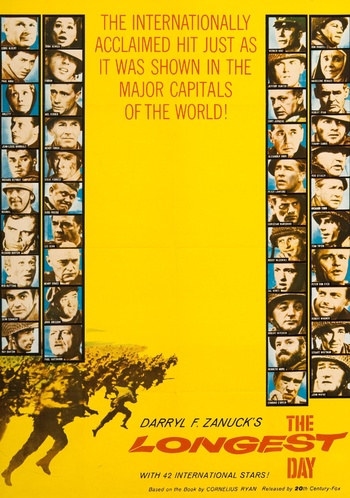 The Longest Day is a 1959 book by Cornelius Ryan describing the events of D-Day, the landings of the Allies in Normandy on June 6, 1944, which was the crucial first step in the liberation of Western Europe from the forces of Nazi Germany by the Western Allied forces during World War II. The events are seen through the eyes of as many of the participants — Allies, Germans, and local inhabitants — as he could find and interview.

In 1962, the book was made into a big-budget feature film, which boasted a large All-Star Cast. Rather than focusing on one particular group of participants in the manner of Saving Private Ryan, the work aimed to provide an overview of the events of D-Day as they unfolded. Viewpoint characters include French resistance fighters, German generals and local commanders, Allied generals and commanders as well as members of the Airborne troops, Rangers, infantry, air force and navy components of the landings. It was such an Epic Movie that it required three directors: Ken Annakin for the scenes with the British, Andrew Merton to direct scenes with Americans, and Bernhard Wicki for scenes with Germans.

The huge All-Star Cast included Richard Burton, Red Buttons, Henry Fonda, Jeffrey Hunter, Curd Jürgens, Robert Mitchum, Robert Ryan, John Wayne, Hans Christian Blech, Gert Fröbe, Mel Ferrer, Bourvil and many others. Because the film was made just 18 years after the events it depicts, many of the older actors had actually fought in the war, and some had even taken part in the landings. Richard Todd even played his own commanding officer from 1944.note Todd had participated in the Pegasus Bridge operation as a young soldier, and is even shown in the film interacting with "himself", although this is never mentioned in the film. Supposedly, he was offered the chance to play himself, but he picked his CO instead because he felt his own role in the landings was too small.

Another Cornelius Ryan book, A Bridge Too Far, later got a similar all-star-cast epic movie treatment. For a "sequel" in spirit from the same decade, there is Is Paris Burning?, about the events that followed the battle of Normandy leading to the liberation of Paris, with a similar Epic Movie and All-Star Cast treatment.

The Longest Day provides examples of the following tropes: