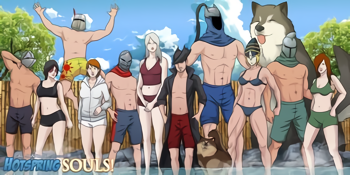 Everybody deserves a vacation!note From left to right: the Slayer of Demons, the Maiden in Black, Solaire of Astora, Rhea of Thorolund, the Chosen Undead, the Plain Doll, the Hunter, Sweet Shalquoir, Artorias the Abysswalker, Lord's Blade Ciaran, Great Grey Wolf Sif, the Bearer of the Curse, the Emerald Herald
Advertisement:

is a 2015 fanfiction by Cal Santiago.

Exactly What It Says on the Tin, the story is a Hot Springs Episode that begins with the Hunter and the Doll (from Bloodborne) winning a raffle and receiving vouchers for an all-expense paid weekend vacation at an inn/hotspring in the countryside. Since they have extra vouchers, they decide to invite Artorias the Abysswalker and Lord's Blade Ciaran along. They are later joined by Solaire of Astora, the Chosen Undead, Rhea of Thorolund, the Bearer of the Curse, the Emerald Herald (Shanalotte), the Slayer of Demons and the Maiden in Black. Only, this vacation isn't as "normal" as the gang would expect... Shenanigans inevitably ensue!

The sequel, Slice of Souls!

, is an anthology of (relatively) slice-of-life oneshots starring the gang and their friends, and also introduces characters from Bloodborne: The Old Hunters.

A third installment of the series, Sibling Souls!

primarily stars the Chosen Undead and focuses on him and his relationship with his older sister Anri of Astora. This story marks the debut of Anri, the Ashen One, the Fire Keeper, and Horace the Hushed from Dark Souls III.

See the larger version of the page image here.