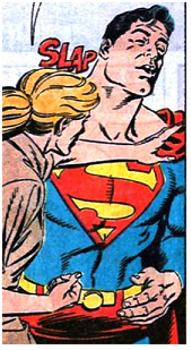 Even the Man of Steel is no match for the Palm of Titanium.
"You know, it's funny that even though I'm a god and I can be smashed into buildings without getting hurt, apparently a slap from a mortal can still have my face go in the other direction."
— Chester A. Bum

from Bum Reviews as the title character of Thor: The Dark World
Advertisement:

The hero's friend, girlfriend/boyfriend, parent or younger sibling, or a random civilian (whose pastry shop was destroyed in the Final Battle) is about to explode, and they're at ground zero, often without a bomb kit or a prayer, and The Hero is not helping. So, they slap him/her — and it hurts. Doesn't matter if they're Made of Iron, Nigh-Invulnerable, or even completely invincible, or how weak or powerless the slapper normally is. The victim will feel the pain.

The Armor Piercing Slap is an interesting trope. It can be played in slapstick comedy or take place in a VERY serious moment. The whole essence of it is that a significantly weaker character slaps a stronger character in order to get something through their head that they just won't understand otherwise. This is accurate to real life, where being struck by a loved one can be humiliating, and hurtful.

Maybe they truly did something wrong, like cheating with another girl/guy or lying about taking them out to play, or maybe they just aren't acting like themselves. Maybe the compromising position they have been found in isn't really what it looks like (anything from being assaulted by a Clingy Jealous Girl to suffering an Accidental Pervert moment or even a completely Unprovoked Pervert Payback). No matter what the cause, the slapper is hurt by the (apparent) betrayal and they won't stop until the other feels the pain.

If Played for Laughs, then it's much less serious. Maybe they're in a tussle and they throw one of these at one another to show how badly both of them suck at fighting. Bob and Alice (both only 5'3 and 100lbs) go at it but instead of throwing powerful punches they slap at each other just to show that they both suck (double points if both slap at the same time and hurt each other). Maybe it's the boyfriend being slapped by the girl. If he had no idea why she was angry, or if she were a stranger, or if he were a total jerk, he would defend himself. Which is why this trope almost never happens to anyone but the guy who knows exactly why she's mad (whether or not he's actually at fault), regularly associates with her, and is at least half-way decent. Even if this guy is a master martial artist and she hasn't taken a single karate class in her life, she'll smack him silly because he all but lets her. Although less often, maybe she was with another guy, and that hurt him just that bad, to the point where he slaps her and storms off. (But normally, if it is the boyfriend, he'll settle the score with the other man first...)

Why is the guy so powerless? Because it's a Double Standard. Maybe the 5-year-old is just so angry that even the usually invincible hero doesn't know what's going on. Or perhaps it's just played for not-so-serious and we are supposed to be amused at how such a normal human (even if they are strong for normal) is able to injure someone who can tank a nuke easily.

Even if they doesn't quite understand it themselves, they instinctively know that if the slapper doesn't hurt them now, their wrath will fester into long-lived anger. Their association or relationship will be soured if not broken off altogether. Compared to that, a bit of mind-numbing pain seems the lesser of two evils—if they're allowed to take their pound of flesh, maybe they'll be more inclined to hear apologies or explanations later.

And so, the slap effectively pierces their armor.

Truth in Television, as anyone who interacts with young children on a regular basis can know.

But be careful now, it doesn't mean they won't hit back.

See also Mundangerous and the Megaton Punch. Not related to Armor-Piercing Attack or Armor-Piercing Question. If someone is slapped while they're having a severe emotional meltdown, see Get a Hold of Yourself, Man!.