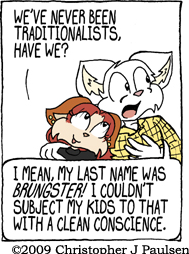 His new last name is Oven. Make of that what you will.
Advertisement:

A soon-to-be-married woman has difficulties with the idea of changing her last name. Or perhaps, her soon-to-be husband has difficulties, or maybe his mother has problems (often because she doesn't like any daughter-in-law taking the same name she changed her own to). This trope usually starts with the woman in question writing out her maiden name along with her married name to try it out, or try saying it in front of a mirror for practice. Usually, the lady is an established career woman (or wants to be). Less often, there is the issue of the aesthetics of the name: should Rhea Mills have to be saddled with ridicule for the rest of her life for having married Robert Peer? (As a general rule, since you never know who she might marry, it would be wise to avoid naming your daughter "Anita".) Truth in Television, obviously, and a potentially contentious issue.

A traditional solution was for a married woman to take her maiden name as a middle name (e.g.: Laura Ingalls Wilder). It's still done today, as was the case with Robin Wright when she was married to Sean Penn (well... maybe that's not the most relevant case). Note that this is different from the more modern solution of a hyphenated name. Robin Wright Penn is not the same as Robin Wright-Penn, and this can cause quite a bit of annoyance as hyphenated names gain more prominence over time, while the "maiden name as middle name" falls out of favor.

Particularly applies if you're a media personality. This is partly due to working in an industry where your name is your brand, and partly due to the typical brevity of celebrity marriages.

Not a completely Universal Trope, as many cultures do not expect a woman to change her name (like Korea, Vietnam, China, Arab countries, and Spanish and Portuguese speaking countries), and some do not use surnames at all (like Iceland, Mongolia, many Indonesians, and the Tamil people of South and Southeast Asia). Asians in general tend to avert this, with women keeping their names after marriage being the norm. This came from the belief that while a woman is expected to value her husband, she is supposed to value her parents more, so discarding the surname inherited from her father is considered disrespectful. The only exception is Japan, which prescribes husband and wife to be listed on the same family register, and thus to have the same surname. While it's almost always the woman who changes her registration and surname, it's legally equivalent for the man to do so and is considered a decent compromise if the woman is from a particularly high-status family (especially if they have a large Family Business) and/or is the last of her name. This could similarly be required as part of marriage negotiations in England if the bride's family were nobility but had no sons to carry on their name. The husband changing his last name in this manner would however require either an Act of Parliament or a Royal Warrant to enact, and thus was only even an option among the most well-connected families.note The same procedure was required if a noble with no surviving heirs bequeathed his estate to a distant cousin but required they adopt his last name to keep it alive. In such a case the adopted heir would keep his own father's last name but add the new name to it. Confusingly, hyphenation was traditionally not used for this and thus it'll look just like a middle name when written. In the modern era, some descendants of such families have added a hyphen to avoid that confusion, such as two of Sacha Baron Cohen's cousins (though not the comedian himself). Invariably the would involve arranging a marriage with a younger son of another noble family, who would thus still have their eldest son to carry on their own family name and keep both family dynasties intact. Women did not change their name in France before the Code Napoleon, which is why they still don't in Quebec. In the former Soviet Union, the choice to change one's name is part of the (civil and very bureaucratic) ceremony, and the man changing his name is not unheard-of, though less common than the woman changing her name or there being no name change at all.

Note that keeping the maiden name is extremely common among female scientists and other academics, as their professional reputation is built upon their peers being able to track their body of work through published studies, most of which only show the last name and first initial of the contributor. Female authors, likewise, and especially their publishers, tend to prefer it if their readers aren't confused by their books appearing with two different names on the covers. Women who do change their legal names when they marry may also continue to use their maiden names socially or professionally, especially in fields like acting where stage names are common.

With same-sex marriage becoming legal in many parts of the world these days, the problem with applying this practice to a same-sex couple is obvious. Since there is no traditional protocol to follow, it's up to each couple to choose a solution that works for them. The most common solutions are for the spouses to simply keep their original names or to hyphenate. It's not unheard of for one partner to take the other's name, but it may lead to unwanted implications that the one who changes their name is the "passive" one in the relationship.

See also Meaningful Rename. Compare Nom de Mom, where the woman did change her name, and her offspring changed it back. Also see the Mrs. Hypothetical, who's gone through this debate well in advance.