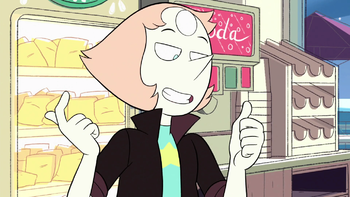 "It's cool, because the collar isn't supposed to go that way."
Advertisement:
open/close all folders
"Kindergarten Kid"
"Know Your Fusion"
"Buddy's Book"
"Mindful Education"
Advertisement:
"Future Boy Zoltron"
"Last One Out of Beach City"
"Onion Gang"
"Gem Harvest"
"Three Gems and a Baby"
Advertisement:
"Steven's Dream"
"Adventures in Light Distortion"
"Gem Heist"
"The Zoo"
"That Will Be All"
"The New Crystal Gems"
"Storm in the Room"
"Rocknaldo"
"Tiger Philanthropist"
"Room for Ruby"
"Lion 4: Alternate Ending"
"Doug Out"
"The Good Lars"
"Are You My Dad?"
"I Am My Mom"