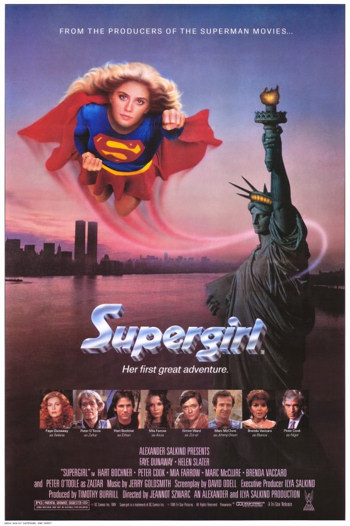 The 1984 film Supergirl followed Superman III; it was produced largely due to Christopher Reeve's lack of interest in portraying the Man of Steel a fourth time. Series producers Alexander and Ilya Salkind wanted to milk more money out of the franchise, and since they owned the film rights to Supergirl, they appeared to have found a way to continue the franchise despite no longer having its star actor.

After considering many other actresses for the title role, Helen Slater was cast as Kara/Supergirl (marking her film debut), while Faye Dunaway played the movie's primary villain (the witch Selena) and Peter O'Toole portrayed Kara's Kryptonian mentor Zaltar. In an attempt to offer continuity with the Superman films, Marc McClure reprised his role as Jimmy Olsen, and Lois Lane's sister Lucy (Maureen Teefy) appears as the roommate of Linda Lee (Supergirl's Secret Identity).

Argo City is a part of Krypton that survived the planet's destruction and thrives in another dimension, but is dependent on the tiny-but-powerful device known as the Omegahedron. Zaltar has been secretly fooling with it and when he hides it with innocent Kara (cousin of a certain Kal-El), her own foolishness causes it to "escape" the city. Everyone will be doomed in a few days without it, so she heads out into our dimension to retrieve it. Following it to Earth, she gains her own superpowers from its yellow sun. Supergirl tracks the Omegahedron to the small town of Midvale and learns it has fallen into the clutches of Selena, who is using its powers in service of her witchcraft to Take Over the World.

The film's running time was slashed by its North American distributor, TriStar Pictures, for the American theatrical release — from 125 minutes to 114 minutes — and slashed further to 92 minutes for broadcast networks and syndication. The film was eventually released on DVD with both the 125-minute International Cut and a 138-minute Director's Cut present (the latter basically being the rough cut before any scenes were deleted, with the exception of a scene where Selena kills a protestor).

For tropes regarding the 2015 CW series starring Melissa Benoist in the title role, see this page.

A new film incarnation of Supergirl is set to appear in the DC Extended Universe, played by Sasha Calle. She will be introduced in the 2023 Flash film.