This page details the guardian spirits. Head back through here for other character pages. 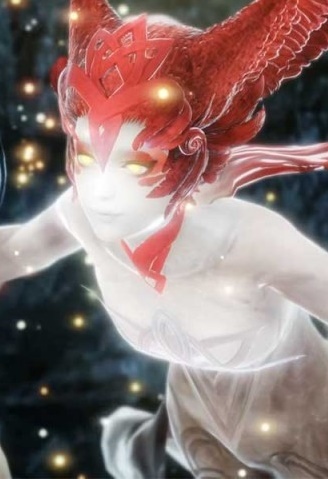 Aquatic guardian spirit that resembles the Merrow of Celtic legend, with feathered wings and a fish's tail. Saoirse can warn of impending danger and sense Amrita. She was praised by the village from whence William was born. However, war devastated the land, claiming the lives of William's family and William himself as a child. At death's doorstep, Saoirse saved the young William, effectively granting him immortality so long as he believes in her. Since then, has been with William, and is both friend and family to him now - or perhaps something more. 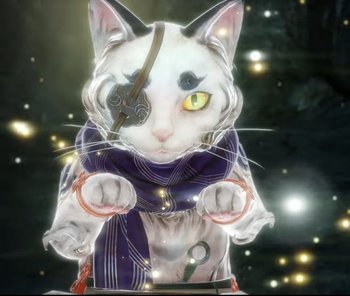 Japanese myths speak of cats that mysteriously transform upon reaching a ripe old age, gaining the ability to walk on their hind legs, and have their tails split in two. These cats are called "Nekomata" and not only posses magical powers, but also the capacity to understand human speech and communicate their thoughts. For this reason, Nekomata have long had dealing with human civilization, and have protected several generations of Hattori Hanzo. With the Nekomata's tendency to watch silently from the shadows, there is no Guardian Spirit more fitting for a ninja.

Kato
A fire-based elemental Guardian Spirit in the form of a wolf, it is said that a Kato is born if a she-wolf is hit by a shooting star on the first month of her pregnancy. They are believed to cause forest fires ignited by lightning strikes, and as such are seen as an ill omen of house fires and other disasters. However, they're also praised as servants of the God of Fire.
Isonade
A Guardian Spirit water-elemental in the form of a shark pack, the northern seas serve as the Isonade's hunting grounds. They capture their victims with their powerful tails and pull them under the waves; even a slight breeze foretells one's doom to the Isonade. Local sailors believe the Isonade are to blame for the rough seas that can easily claim their lives, thus they make offerings in prayer for calm sailing.
Daiba-Washi
A wind-based elemental taking the appearance of a hawk, this Guardian Spirit is named for a mysterious phenomenon where the wind suddenly picks up and horses unexpectedly die for seemingly no reason. Witnesses describe the occurrence as a whirlwind of glowing needles surrounding their hapless victims. It's said that slashing the air in front of a horse will nullify the phenomenon. Some, however, venerate the Daiba-Washi as a entity of protection.
Fuse-Ushi
A spirit of a bull allied with Kuroda Nagamasa, the Fuse-Ushi protects its believers from misfortune. Bovine mammals have always served alongside humans, with their strength being essential for agriculture and other aspects that support their lives. Respect for these animals have even led to some folk swearing off consumption of beef, as sign of their gratitude. Patting one's belly is a sign of respect, allowing the Fuse-Ushi to absorb negative Ki.

Mizuchi
The dragon, Mizuchi, favor those who harbor great ambition, thus one comes to possess Kuroda Kanbei. It's said the Mizuchi normally take refuge in deep rivers, but upon death, they ascend to the heavens and become powerful celestial dragons. Such beliefs were widespread during the Warring States Period, and many ambitious warriors greatly respected the Mizuchi.
Paired Raiken
Lightning spirits in the form of Shiba dogs, a pair of them serve as the Guardian Spirits of the Tachibana clan. Many of the "komainu" statues that inhabit shrines throughout Japan are made in their likeness. Those who defiled holy ground suffer their wrath in the form of lightning strikes. According to legend, when Tachibana Dosetsu succeeded in cutting lightning, its spirit transformed into a Raiken; thus, it has served the Tachibana clan ever since. It's said that each Raiken has a mate, and together their true power is unleashed.
Hi-nezumi
Also known as the "Fire Rat", the Hi-nezumi favors those who face difficult problems head-on. In "The Tale of Princess Kaguya", one of the impossible tasks she gave was to acquire a coat made from the fur of a Hi-nezumi. A suitor tried to take the easy route of simply buying one, thus failed the task. If he had tried taking on the task without cutting corners, perhaps a real Hi-nezumi would have come to his aid.
Aya-komori
A Guardian Spirit in the form of a bat swarm, it's seen with Kobayakawa Hideaki. This creature is heavily associated with the bonds people make: on the outside, it seems out-going and friendly, but reveals its true colors to those who are consumed by these bonds. An Aya-komori gives its protection to a master, whether they choose to cope with these bonds or break them entirely.
Itokuri
Unlike most Guardian Spirits, the Itokuri isn't content with simply protecting mortals. This arachnid-based Spirit enjoys toying with the fates of others, taking them down long, winding paths before they finally meet their fates. Quintessentially, Matsunaga Hisahide was remembered for his villainy, but was also recognized as one of the most cultivated gentlemen of his time. Regardless, the Itokuri's influence expands far and wide, with no clear extent of its power.

Makami
These wolf guardian spirits, also known as Oguchi-no-Makami, are said to be the servants of the mountain gods.Mountain wolves were seen as the embodiment of the fear and awe men felt towards the mountains, the domain fo the gods, that they were unable to claim for themselves.
Ame-no-Mitori
An eagle-like guardian spirit enveloped by lightning. They are also known as Ame-no-Hinatori or Takehinatori, and are seen as either a servant of the lightning gods or as a lightning god itself.
Kagewani
This guardian spirit, resembling a shark, is actually a type of tatari-gami (cursing god). Although they are usually hostile towards humans, they will offer their protections to those that worship them. It was said that Kagewani would eat the shadows that fell on the surface of the sea, and that those who had their shadows eaten would die shortly after. This was deemed to be a way of punishing man for venturing out of his realm. As such, sailors would make offerings to appease the sea gods before venturing out into the waters
Masaru
Masaru is a Guardian Spirit that takes the form of a monkey. Throughout Japan, monkeys have long been thought to be messengers of the mountain gods or the mountain gods themselves. This is perhaps not entirely unusual, seeing as they look so similar to humans, and are yet so unlike us. At the Hiyoshi Taisha Shrine, a monkey known as Masaru is worshipped as the messenger of the mountain god, Sanno Gongen. Sanno Gongen is the sun god and god of Mount Hiei, a mountain to the northeast of Kyoto that, because of its location in an inauspicious direction, was believed to have the power to ward off evil. Tokichiro always felt a deep connection with Hiyoshi Taisha Shrine due to its similarity to his own childhood moniker, Hiyoshimaru. It is said that this led to his devout worship of Sanno Gongen
Shirohami
hirohami is a Guardian Spirit in the form of a white viper. White snakes are worshipped in many regions of Japan as messengers or personifications of the gods, often being seen as symbols of growth, rebirth, long life, and prosperity. The messenger of Benzaiten, patron goddess of prosperity and the arts, is believed to be a white snake that will bring one vast riches. This belief has led to the Japanese practice of keeping the shed skin of a snake in one's wallet, or using a wallet that is made of snakeskin. Many snake deities are also considered gods of the water, a famous example being the white snake emissary of the Suwa Grand Shrine. The viper's powerful venom and extremely resilient nature have long made it an object of reverence, so a white viper in particular should be considered a most powerful spirit.
Rokugezo
Rokugezo, meaning "Six Tusked Elephant", takes the form of a gigantic white elephant. Elephants were once used in Tianzhu (modern-day India) as a symbol of military might, with the number of elephants possessed by an army corresponding to that army's perceived strength.

It is said that in heaven, elephants served as the Buddha's mode of transport. It is widely known that the boddhisatva Samantabhadra and Sakra, Lord of the Devas, were also elephant riders themselves.

Okuri-Inu
Okuri-Inu is a dog spirit that is said to follow those who walk the mountain roads in the night, killing and eating those who are unlucky enough to lose their footing. While this makes it feared, it has also been known to protect mountain folk from wolves. Some choose to worship Okuri-Inu, believing that its predatory nature serves as a precautionary tale that serves to educate and therefore protect the people.
Hiyobishin
A Panther spirit that boosts Guard and Anima.
Yaonami-Hime
Yaonami-Hime possesses the upper body of a woman and lower body of a fish. Once the daughter of a noble family in the Heian period, she consumed the flesh of a mermaid and was granted eternal life. However, her immortality came at a price as she was forced to watch the people she loved depart this world one by one. Unable to bear the sadness and loneliness that accompanied her gift, she finally drowned herself. It is said that deep beneath the water's surface, she was transformed into a mermaid. Mermaids have existed in Japanese folklore for many centuries. Besides being written about in the Nihon Shoki in the year 720, there is also the famous account of Prince Shotoku, who built a temple to honor the request of a soul who had been turned into a mermaid due to their deeds in a previous life. Mermaids are seen as both auspicious and inauspicious, with some considering them ominous portents of natural disasters and others believing in their ability to extend one's life or protect one from fire.
Hiyokucho
A two-headed bird spirit who increases the Ki.
Yumehami
A dream-eating Tapir spirit that provides Anima bonus.
Hakutaku
Hakutaku is a sacred beast that fathoms human speech and is said to have knowledge of all things. According to legend, this three-eyed beast with the beard of a goat is said to only appear before the virtuous. It is believed that Hakutaku possesses an immense amount of knowledge about the world of spirits and demons, including the knowledge of how to drive away those who cause illness. There is even a theory that the Yellow Emperor, one of ancient China's Three Sovereigns and Five Emperors who is said to be the ancestor of modern medicine, received his medical knowledge from Hakutaku itself. This has led people from all walks of life, from statesmen to commoners, to keep drawings of Hakutaku on their person or by their bedside to drive away misfortune or disease
Inosasao
Inosasao is an ancient boar that is said to have gained supernatural powers over its many years of living, its immense age apparent by counting the dwarf bamboo stalks that grow on its back.Since the Jomon period, the wild boar has been worshipped as a symbol of childbirth and bountiful harvests due to its ability to produce many offspring. Others worship it as a symbol of the power of nature, its ferocious strength and sharp tusks reminding them how savage nature can be. While the worship of boars has become less common over time, several legends of boars who have come to the aid of humans remain.
Isanagami
A whale guardian spirt that increases the drop rate of Tea Utensil