This page details the main characters. Head back through here for other character pages. 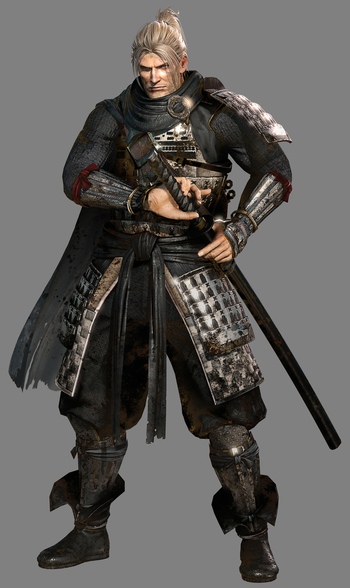 An Irish-born English sailor, William lost his parents in an unknown conflict when he was a child, which also took his life, until the Guardian Spirit Saoirse resurrected him. Thanks to Saoirse's ability to find Amrita, William was able to find the powerful spirit stones, making him an invaluable privateer by the English government. When he stumbled upon a secret military project by the English to weaponize Amrita in their war against Spain, William is imprisoned in the Tower of London, awaiting his execution. His escape with Saoirse serves as the start of Nioh. 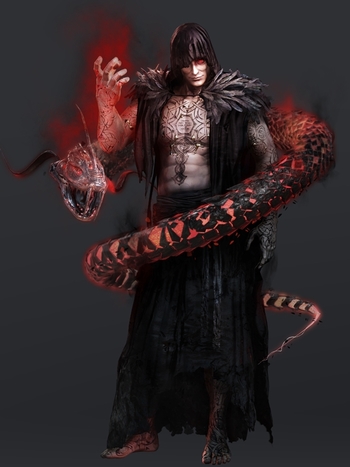 Edward Kelley is an English alchemist. Having mastered the secret of turning lead into gold, he uses Amrita to turn humans into monsters and reanimate corpses. He has a Guardian Spirit named Uroboros and is able to disappear, disguise himself as another, and steal other people's guardian spirit to use for his own purpose. On the orders of John Dee, he stole Saoirse-who is able to detect Amrita-from William, and set out for Japan, a land full of high-quality Amrita lying fallow. He is cruel and determined, willing to do anything to achieve his goals. He thrives in the chaos of war, taking sadistic pleasure in human suffering.

Hattori Hanzo is a ninja in the service of Tokugawa Ieyasu. His real name is Masanari; "Hanzo" is a name inherited by each successive head of the ninja clan in Iga province. Although his father was known as "Hanzo the Oni", the current Hanzo has more of his father's skill as a ninja than his prowess as a military commander. He is a master of intelligence, concealement, and sabotage, and leads an army of several hundred ninja who lurk in the shadows waiting to carry out secret orders from their lord. As one of the few people in Japan with knowledge of foreign languages, Hanzo also guides the newly arrived William in his search for Kelley.

Okatsu is a female ninja or "kunoichi" under Hattori Hanzo and the daughter of Tokugawa Ieyasu. Trained in the same Iga ninjutsu as Hanzo, she accompanies William on his travels. Okatsu's mastery of every aspect of the ninja is said to rival even her teacher Hanzo's and makes her a strongly trusted figure. Her elder brother Nobuyasu was killed at an early age, allegedly to ensure the safety of Ieyasu himself. She has borne a grudge against Ieyasu ever since, and left his household as soon as she could to study under Hattori Hanzo. She despises not only Ieyasu but all samurai - and, indeed, the entire bloody, warlike world she is forced to live in. 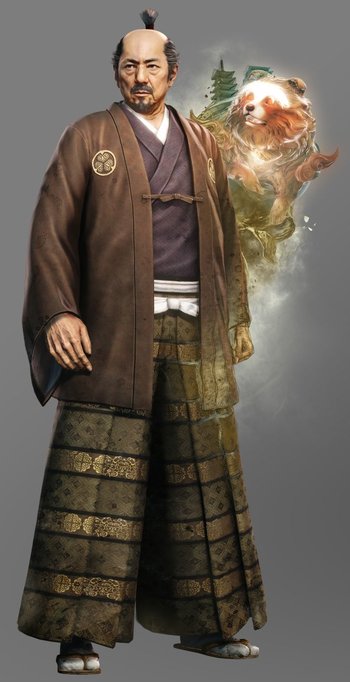 Tokugawa Ieyasu was daimyo of the "Eight Provinces" of the Edo region, and leader of the Five Elders advising Toyotomi's government. As a survivor of battle after battle, he became known as the "Greatest Archer on the Eastern Way" - in other words, the most skillful general in Eastern Japan. He was also gifted and a cunning schemer, which earned him his other nickname: the Tanuki. At a young age, he served the Imagawa clan as a hostage. After this, he formed an alliance with Oda Nobunaga and struck out on his own. The ongoing threat posted by the Takeda clan, however, meant that the pact with the Oda clan became more of a master-servant relationship, and he became familiar with the struggles of being a minor force. After his service to Toyotomi Hideyoshi, today he is considered closer than anyone to conquest - and unification - of all Japan.

The player avatar and one half of the legendary "Toyotomi Hideyoshi". A half-yokai Shiftling, Hide can transform from a human to a yokai form.
Kinoshita Tokichiro

One half of the legendary "Toyotomi Hideyoshi", a street-smart Spirit Stone-peddling self-described reprobate with ambitions of reaching the peak of Japan's social and political hierarchy. He possesses the ability to use spirit stones to pacify rampaging yokai, turning them from aratama into nigitama.
Mumyo

A masked scythe-wielding demon-hunter who reluctantly joins Hide and Tokichiro on their quest.
Kashin Koji/Otakemaru 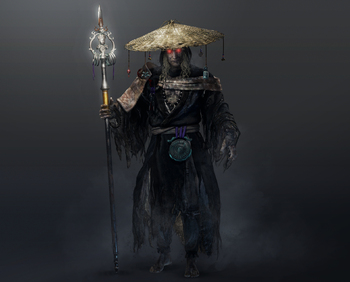 A mysterious entity involved in Hide's past who obstructs them at every opportunity.