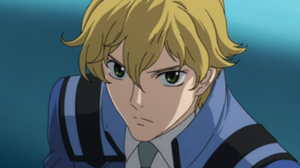 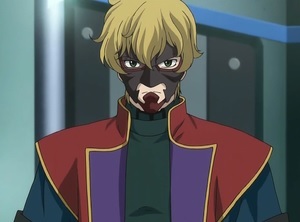 Ace Pilot of the Union, and something of a Fanboy when it comes to Japanese things. Graham tends to relate things with Japanese, following some sort of Bushido code, yelling about surpassing Ashura in battle, etc. Despite that, he is one of the best pilots in the world, being the first to deal any substantial damage to a Gundam without a scratch. He also has a bizarre attraction to the Gundams (or more specifically, Exia), often talking about them in romantic terms even as he fights them.

In the second season, he returns wearing a mask, now calling himself Mr. Bushido. 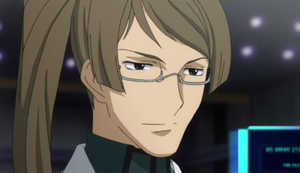 A mobile suit developer and friend of Union Ace Pilot Graham Aker. After the appearance of Celestial Being, Billy, Graham, and Professor Ralph Eifman, who had taught Billy in college, are transferred to the Anti-Gundam Investigative Task Force, later named "Overflags". Billy is a former classmate of Sumeragi Li Noriega (aka Leesa Kujo) and inadvertently leaks information about "Project G" to her and Celestial Being. After the death of Professor Eifman and Howard Mason during an attack by Team Trinity, Billy uses one of the recently acquired GN Drives to upgrade Graham's Flag unit to the GN-Flag in order to fight the Gundams.

By the second season, Billy is taking care of a despondent Kujo, still unaware that she was a member of Celestial Being until Setsuna appears to retrieve her. Shocked by this revelation, Billy joins the A-Laws and becomes the head of mobile suit development. Once again teaming up with Graham Aker, now using the alias Mr. Bushido, Billy develops the Masurao and later the upgraded Susanowo. 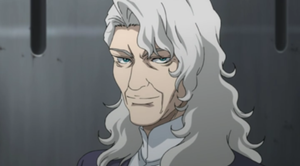 He is a famous Union engineer, technical chief, and scientist of several fields. He's also the co-developer of Union's OverFlag. 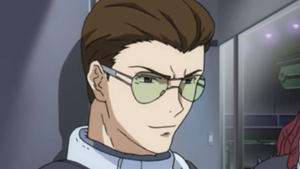 Howard Mason is a Union NCO with the rank of Warrant Officer. One of the first Flag Fighters assigned to the Anti-Gundam Investigative Task Force "Overflags" under Graham Aker. He seemed to have a friendship with Graham due to their belief in the qualities of the Flag. 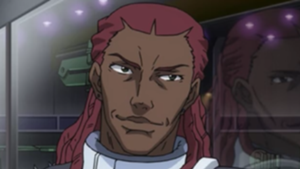 Daryl Dodge is a Union soldier with the rank of Master Sergeant. Another first Flag Fighters assigned to the Anti-Gundam Investigative Task Force "Overflags" under Graham Aker. Unlike Graham and Howard, he doesn't share their faith that a Flag can beat the Gundams.

In season 2, Graham named his Masurao's two swords "Howard" and "Daryl" in their memory.