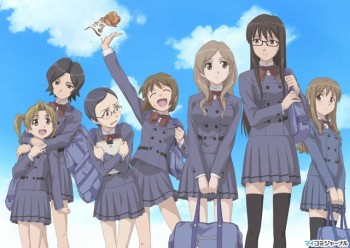 From left to right: Miyako Taema, Tomoe Hachisuka, Azusa Aoi, Kiyori Torioi, Ushio Kazama, Sumika Murasame, and Yamasaki Akemi
Sumika Murasame is deeply in love with her cheerful classmate and friend Ushio Kazama. Ushio has a thing for girls, too, but... she's into cute girls. Sumika's problem is that she is too cool: top student, class representative, perfect in sports, black belt in karate, the list goes on. Not only girls, even guys are slightly afraid of approaching her. She herself, for all that's holy, doesn't want to endanger her friendship with Ushio, as much as it pains her to hide her feelings.
Advertisement:

Whispered Words (Sasameki Koto note lit. "Something Whispered") is a Girls' Love manga by Takashi Ikeda, that ran from May 2007 to September 2011 in Monthly Comic Alive. Contains little blatant Fanservice, and a well-balanced mixture of comedy and Angst. All in all, a very enjoyable GL romantic comedy. It ran a total of 53 chapters over 9 volumes.

Compare Kiss and White Lily for My Dearest Girl, the other famous yuri work than ran in Comic Alive.