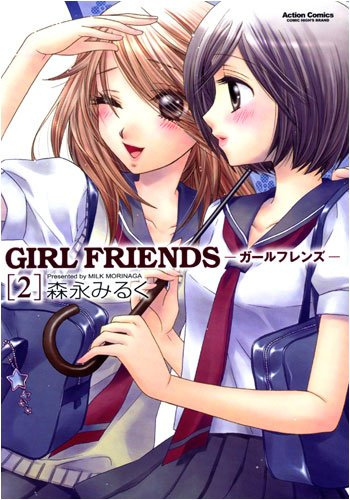 Mariko "Mari" Kumakura is a Shrinking Violet who doesn't have any real friends. One day Akko, a pretty Genki Girl in class, decides to spontaneously befriend her. Mari is unsure about being friends with her but ends up going along with it. Inevitably, Akko helps Mari come out of her shell while Mari helps Akko with her studies and the two quickly become best friends. With Akko's help, Mari makes many new friends and Mari finds herself happier than she's ever been in her life.

But wait... Mari starts wondering why she's feeling so jealous of the thought of Akko gaining a boyfriend and castigates herself for feeling so possessive. She's starting to blush a lot in Akko's presence and Akko's touch is making her heart race. Could Mari be falling in love with her best friend?

Girl Friends is a finished Yuri Genre manga by the female Mangaka Morinaga Milk, and it is considered a modern classic by a large portion of fans of the genre. New readers should expect lots of Gayngst and Will They or Won't They?. It has been licensed in the US by Seven Seas Entertainment in the form of two Omnibus Collections, with both volumes debuting in the New York Times Manga Best Sellers list on the week of their release.

Not to be confused with the African American sitcom Girlfriends. Or with a non-yuri romance manga called Girl Friend (no s). Or the 1978 indie film Girlfriends.