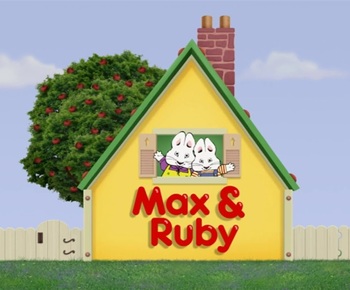 Max and Ruby is a series of children's books, written by Rosemary Wells. It has been adapted by Nelvana into a Canadian children's cartoon/Kid Com (helmed by Wells), which aired on Treehouse TV from its 2002 debut to 2019. Production of new episodes stopped for a while around 2007, but the continued popularity of the series led to revived production of new episodes, with seven official seasons of the program to date and a revived merchandise line.

Max and Ruby are a pair of young sibling rabbits who live in a fairly normal suburb. Their parents are seemingly nonexistent, so it usually falls to older Ruby to look after the younger Max. Young Max, however, is a rambunctious troublemaker with a hugely one-track mind — such to the point that in every episode, his dialogue typically consists of only one word, repeated with a variety of different inflections. In over her head, the somewhat controlling Ruby often tries to bend him to her will. And typically fails. Sometimes, she even goes so far as to drag Max into her Zany Scheme of the day. It typically works out all right in the end, however, and Max's meddling desire to get what he wants is often strangely beneficial to Ruby's scheming.

In 2016, the series underwent its second and most significant Retool. The parents are no longer nonexistent, but instead are seen occasionally on-screen in each episode, though Max and Ruby still mostly solve their problems themselves. Max's dialogue now also includes complete sentences and the character begins attending preschool. The characters having visible parents was later propagated to the books as well, with an newer title

even adding baby twin siblings for the characters. The biggest change is Max and Ruby's maturity, when Ruby abandons her Big Sister Bully ways and becomes a supportive older sibling towards Max and also doesn't shun him out anymore, while Max is old enough to solve his own problems and is used as a sub-plot in each episode of the second retool.

This is the second series based on Rosemary Wells's characters with the first being Timothy Goes to School from 2000, which was also produced by Nelvana.

Episodes can be found on the show's official Youtube channel

Statler: Say, Waldorf. Why does Max always get bossed around by his sister?
Waldorf: I don't know. Maybe it's because he won the award for "Worst Sibling of The Year".
Both Do-ho-ho-ho-hoh!