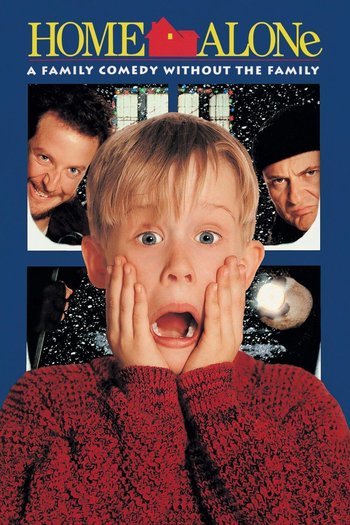 During the Christmas holidays, his extended family comes to stay overnight with his already-large immediate family to prepare for their vacation to France (where more of their relatives are temporarily living). Kevin causes trouble during dinner, pushing his oldest brother, Buzz, in anger for eating his cheese pizza. As punishment, Kevin is forced into the attic where he was intended to sleep with his bed-wetting cousin, Fuller. Before he goes, he angrily tells his mother that he never wants to see her or anyone else in the family again.

The next day, the family oversleeps due to a power outage, and they hurry to the airport to catch their flight to France, accidentally leaving Kevin behind. He wakes to find that he has the house to himself. After a brief moment of panic, he exults in his new freedom, gorging on junk food and watching violent movies. However, a pair of burglars named Harry Lime (Joe Pesci) and Marv Merchants (Daniel Stern), the self-proclaimed "Wet Bandits" (after the fact that Marv likes to flood the houses they rob), are planning to put a hit on his house for its valuables.

The rest of the movie is about the efforts of the robbers to sack the house and the efforts of Kevin to foil them. Along the way, Kevin befriends an elderly neighbor who is rumored to be a serial killer. Kevin's parents realize too late that they are missing a member, are frantically trying to get back home to find their son.

A beloved family comedy, this 1990 film made Macaulay Culkin a celebrity. It was written and produced by John Hughes, known for his teen comedies, and directed by Chris Columbus, with the most Christmas-ish soundtrack ever by the one and only John Williams.

The movie was followed by a few sequels, as well as a licensed game: