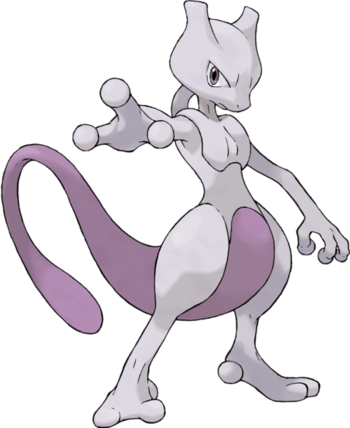 "Behold my powers! I am the most powerful Pokémon in the world!"

So, you have decided to enter into my lair. You dare to approach me? I am Mewtwo, the most powerful Pokémon in the world. ...Very well. If you are so curious, than I shall tell you my story. But be warned: if I discover intent within you to tell my story to another human, then I will erase your memory.

My story has been told for many years, in many forms, and in different ways. I am a legendary Pokémon, and humans know little about me. My story begins with scientists. Yes, the humans who created me...

Although many stories have been told about me, one thing remains consistent: I am a descendant of Mew, purportedly the ancestor of all Pokémon. And the moment I could, I destroyed the lab where I was born or created and escaped.

You wish to know more about the stories in which you humans portray me? It may not matter much, as I sense your curiosity growing ever stronger. And with it, the desire to share my secrets. I will take care of that afterwards.

My first appearance was in the Pokémon Red and Blue video games. In those games a young trainer read the scattered chronicle of my creation in Cinnabar Island's Pokémon Mansion. The trainer would encounter me much later in Cerulean Cave. Many years later I appeared somewhere else Pokémon X and Y having taken refuge in Pokémon Village's Unknown Dungeon in Kalos.

Upon my introduction in Red and Blue, I was by far at my most powerful, being nearly impossible to defeat by any of your foolish lesser Pokémon. While in later generations that fool Arceus has overtaken me, X and Y have given me two new Mega Evolutions that allow my power to far surpass that of even the Creator. In my X form, my body increases in bulk, and my physical strength far surpasses any known Pokémon. In my Y form, many of my traits regress to make me more closely resemble my template [[Pokémon Red and Blue(or mother)]], Mew. My appearence becomes much smaller as my head becomes much larger, with most of my mass having been converted into brainpower. This enhances my mental capabilities far beyond previously documented limits. In both forms, my higher offensive stat even surpasses the alien Deoxys in its Attack Form, who previously outclassed me in terms of psionic capabilities. I am also stronger than other legendaries' Mega and Primal forms. I have even found a way to overcome the Dark Type, which I admit worried me on some level for a time. Finding almost all of my powers all but useless against them was… unsettling. As such, I mastered Aura and created the Miracle Eye technique, both allowing me to overcome them.

I have also appeared in many other video games. Perhaps my most well-known side game appearance is in Super Smash Bros. Melee, where I was able to use my mental powers to compete against Nintendo's greatest heroes. Unfortunately, the game designers made me far, far weaker. Even a pitiful Jigglypuff could defeat me. Possibly as a consequence of this, I was replaced with a mere Lucario in the games that followed. Of course, there happens to be Dummied Out resources related to me as discovered in Brawl. Also, a group of loyal fans have flawlessly re-integrated me into their Brawl variant, and made me into the Worthy Opponent I deserve to be. Despite my general disdain for your species, I admit that I am honored by their work. In fact, the creator himself decided to honor me by adding me to Super Smash Bros. for Wii U and Nintendo 3DS as a downloadable character, and all have praised my return. I even met "your boy" alongside another little boy on my way back, the latter who surprisingly has a lot in common with me, and who despite all the tragedy and the loss that cursed his life managed to carry on thanks to the love of his friends and family. Without them, he probably would have become like me… If only she… No. It is no use to think about that, it will not bring her back. I am sorry, Amber…I enter the fifth outing only to face an entity far beyond my power and can cripple even gods. I can only hope that the one called Kirby can free me from this accursed prison, defeat the imposter posing as me, and allow me to deliver the final blow to Galeem.

Another of my appearances is in Pokémon Conquest, within the region of Ransei. As the Warriors of Ransei forge Links with Pokémon rather than capture them forcibly, I found the region to my liking, although the portrayal is somewhat… anachronistic. Regardless, I was able to determine the presence of a Warrior who would be worthy of my presence; thus, once Warlord Kenshin of Illusio had shown management prowess that I deemed worthy, I constructed the Mystery Rock to await his challenge. I also participated in the Ferrum Battles in Pokkén Tournament, but got deceived by a mysterious hooded female human who fused my body with an orange gem filled with the Devil Gene and took control over my will. It was quite humiliating to be this woman's pet, but yet strangely… satisfying. My Shadow form was quite reminiscent of what the fools of the Cipher crime syndicate did to the mystical guardian of the seas.

You humans also seem to have a knack for animated television shows created in order to sell merchandise, and Pokémon is no exception. Fortunately, said anime was able to develop me into a somewhat deep and very well-respected character. Pokémon: The First Movie chronicled my creation by Dr. Fuji and my subsequent attempt to search for my purpose in life. During my growth, I discovered that I was created by humans and not Arceus, and that Pokémon were little more than willing slaves to humans. Angry at these circumstances, I invited the strongest trainers in the region to my New Island headquarters to toy with them for my purposes. Using special Poké Balls of my creation, I stole their Pokémon and produced superior clones, which I would then command to annihilate my new foes in battle. My reason for this entire endeavor? It was simply to search for my purpose and prove that I was a superior being, even more than Mew itself. For the English version, in order to make said movie more accessible to children, my motivations were changed to simply Take Over the World by repopulating the planet with my clones. However, in both versions, Ash Ketchum helped me realize the error of my ways; I learned that the circumstances of one's birth are irrelevant, and it is what you do with the gift of life that determines who you are. With that, my clones and I would live in peaceful coexistence with the humans and their Pokémon. I would return in the anime special named, fittingly, Pokémon: Mewtwo Returns, where I would join Ash and struggle against my former master Giovanni once again.

Many years later, the humans made Pokémon: Genesect and the Legend Awakened, which depicted another Mewtwo with the ability to Mega Evolve. But this Mewtwo was less savage and more feminine than yours truly, with many of her backstory elements simply being retellings of my own. The existence of another one of my kind both angers and captivates me. As I will teach you in a matter of seconds, I am the true and superior Mewtwo, and I wish to challenge her in battle to drive this point home. Yet, the possibility of Mewtwo reproduction intrigues me (if biology even allows for it).note I am aware that many of you have shown me great respect, and view this new Mewtwo with disdain. This is largely because many of you believed that it would be me who would fight the Genesect Army rather than her, instead of wasting time on this pathetic website as I am now. I am flattered, but please leave such opinions on the various subjective pages on this site. However, this does not delay your inevitable defeat at my hands.

Another series, known as Pokémon Origins, depicted me as more of a feral, superpowered animal - a much closer depiction to the games. Yet I was captured by Red, who managed to defeat me using his Charizard - though only after inducing a Mega-Evolution. I am proud of his skills, but do not wish to obey the orders of any pathetic human. It is implied the capture only took place so that he could obtain sufficient data for the quest placed upon him for one Professor Samuel Oak; however our encounter took place in the final "File" of that series, and my present state in that depiction is unknown.

I have also appeared in many other media, such as the manga series Pokémon Adventures. This portrayal would gradually evolve to resemble my anime portrayals, and I gained the ability to speak telepathically.

Now, I have finished telling you all I know. But I fear your intrigue has grown too strong. To protect myself and my secrets, I will now erase your memory of me.