Literature / Romeo and Juliet and Vampires 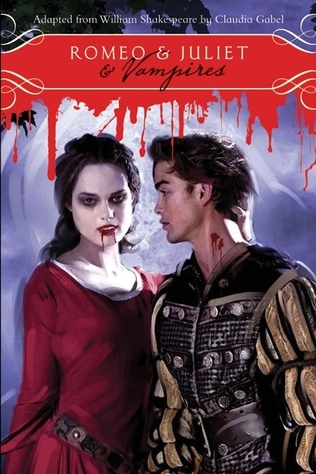 Juliet Capulet has a problem. She's about to turn sixteen, which means she's on the brink of becoming a full-fledged vampire like the rest of her clan, but doing so entails killing and draining an innocent human- something the newly crowned Prince Radu has expressly forbidden after decades of violence between the undead Capulets and vampire-slaying Montagues.

If she doesn't, however, she'll die. Naturally, this makes things even more difficult when she meets Romeo Montague at a ball intended to introduce her to the vampire Count Paris, whom her parents intend to marry her off to. It's love at first sight for both fledgling vampire and slayer-in-training.

Romeo and Juliet marry in secret, but Juliet's transformation is already beginning and her bloodthirsty family have other plans for Romeo- and indeed, all of humanity. What's a girl to do?

Another installment in the Literary Mash-Ups genre, Romeo and Juliet and Vampires was likely intended as an obvious goodie for Twilight fans, but beware: there are no sparkly vamps to be found here, only monsters straight out of the uncanny valley.