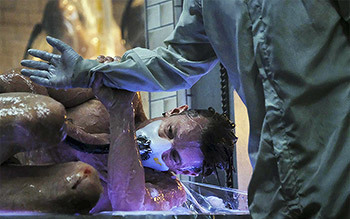 Title from: Out of the Past (1947)
"The first thing you'll learn is that nothing is what it seems. Ignore your assumptions. Don't trust anything. What you see...what you hear. What people tell you...what you think you remember. Let experience wash over you, absorb it like a sponge. Expect nothing. Only then can you be prepared for anything. Your body is not who you are. You shed it like a snake sheds its skin, leave it forgotten behind you. One thing I can promise you, coming back from the dead is a bitch. When you wake up the world will not be what it was, and neither will you. They have forgotten who or what we are. Make them remember. There will be places where they'll wait, the people left behind. Wait to see their parents, lovers, children come back to them, riding unfamiliar bodies out from digital exile. They'll look into the eyes of strangers, searching for a glimpse of the person they have lost."
— Quellcrist Falconer, Opening Narration

Convicted criminal Takeshi Kovacs awakens in a new body after two and a half centuries to help a wealthy man, Laurens Bancroft, solve his own murder.