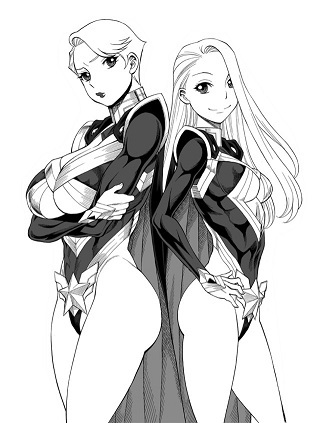 Uchi no musume ni te o dasu na! (ウチのムスメに手を出すな! aka Keep your hands off my daughter!) is an ongoing manga series by Nozomu Tamaki of Dance in the Vampire Bund fame. Seven Seas Entertainment has licensed the manga under the title Don't Meddle with My Daughter!

However, Athena has to do it without Clara finding out, since she doesn't know her mother was the original Eighth Wonder. Athena hid it from her, because there were dark and embarrassing secrets about her superhero career she'd rather Clara not know about...

Fair warning to anyone interested in reading the manga: It's an adult parody of the superhero genre. Meaning, it's NSFW. Now has a character sheet in progress.

Not to be confused with the web novel Uchi no musume no tame naraba, ore wa moshikashitara maou mo taoseru kamo shirenai (For my daughter, I might be even able to defeat the Demon King)