Kimodameshi
aka: Test Of Courage 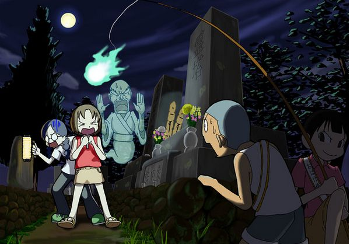 Kimodameshi, usually translated as "test of courage," is a game similar to going to an amusement park Haunted House. Pairs of teenagers (frequently couples, but sometimes it's Not a Date) negotiate a course at night that's set up to be as scary as possible; the path usually leads past carefully-designed eerie scenes, out of which an actor in a ghost costume will occasionally leap to increase the shock factor. It basically identical to PG-rated American-style haunted houses - and, like haunted houses worldwide, it's a chance to give teenagers an excuse to cling to each other.

Kimodameshi is primarily a Japanese cultural artifact; it differs from a Western Scare Dare game in that the kimodameshi is more organized, and works like an ad hoc adolescent Rite of Passage.

It's also an excellent excuse for the writers to spotlight a Love Dodecahedron or push along a Slap-Slap-Kiss relationship. Teams are sometimes randomly assigned, which gives plenty of chances for characters to regret being paired with the "wrong" partner....

Frequently seen in the Festival Episode.

Compare Youth Is Wasted on the Dumb, Scare Dare, Girls Are Really Scared of Horror Movies.