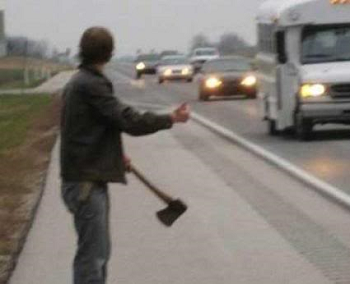 Seems Legit.
Jim Halsey: What do you want?
John Ryder: *laughs*
Jim: What's so funny?
John: That's what the other guy said.
Jim: What other guy?
John: That guy back there, the one we just passed. The guy who picked me up before you did.
Jim: That was him in there?
John: Sure it was. He couldn't have walked very far.
Jim: Why's that?
John: Because I cut off his legs... and his arms... and his head... and I'm going to do the same to you.
— The Hitcher
Advertisement:

In fiction, picking up a hitchhiker is an exceptionally risky proposition, as there's a good chance they're either a) a Serial Killer who will murder you, or b) a wanted criminal (or escaped convict) who will force you to help them evade the authorities, then murder you. This trope can also cover rape, robbery, and other kinds of violence or maltreatment inflicted by hitchhikers on those who pick them up.

This may include a form of Wounded Gazelle Gambit, in which the hitchhiker gains trust by Faking Engine Trouble. They might use their last victim's car for this purpose.

Harmful to Hitchhikers is the Inverted Trope, in which the driver is the homicidal maniac that the hitchhiker needs to beware of. This overlaps with Bad Samaritan. If they're really unsubtle about it, they might even be driving around in a Creepy Stalker Van.

See also Beware of Hitchhiking Ghosts, the difference being that hitchhiking ghosts are generally supernatural and not always malevolent. Also see Not My Driver, for when a driver that the passenger already trusts is replaced by a hostile person, or when the vehicle is an official taxi.