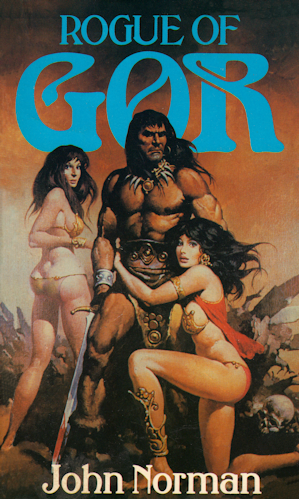 The Chronicles of Gor is a Science Fantasy novel series (one of those that blur the lines between the Science Fiction and Fantasy), written by John Norman (real name Dr. John Frederick Lange, Jr., a professor of philosophy). The Chronicles of Gor starts out as a Planetary Romance before moving on to a sex-slave culture where most of the female main characters are legally property. The planet Gor is a Counter-Earth, a hypothetical planet in Earth's orbit on the other side of the sun, always blocked from view note An impossible situation, and thus fantastic, given the gravitational influences observed upon every comet passing into the inner solar system, even before the advent of interplanetary exploration in the 1960s; then again, if the alien species in question is capable of moving entire planets into orbit around stars, erasing traces of gravitational influence would likely not be such a problem. On Gor, some Sufficiently Advanced Aliens decided to take humans from various eras in human history and dump them together and see what happens, after removing any type of firearm and burning anyone who tries to violate said ban.
Advertisement:

For a complete list of the books, see that other Wiki

A complete subculture has been spawned by these books, taking the philosophy of these books and applying them to their daily lives. This philosophy, known as the Gorean lifestyle

Two films based on the Gor series were adapted into sword & sorcery films in the late Eighties, Gor (1987) and Outlaw of Gor (1989). Loosely adapted from the first two books, the films depict professor Tarl Cabot's adventures after being magically transported to Gor. For better or worse, the films toned down the sex-slavery aspect. This is by no means the only instance of a movie bearing no resemblance (save a few names) to the book that supposedly inspired it, but it is a particularly egregious example from the word "sorcery" onwards.

For the Mystery Science Theater 3000 episode Outlaw featuring the film Outlaw of Gor, please go to the episode recap page.

Outlaw (of Gor) and the Gor movie series contain examples of: