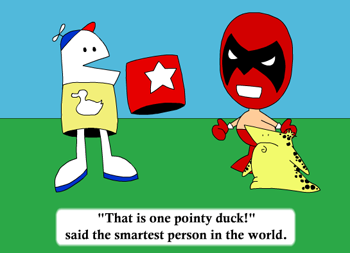 The first and oldest universe, the Storybook universe is a simplistic, crudely-drawn world based on the original children's book by Mike Chapman and Craig Zobel. The star of the show is The Homestar Runner, a simpleminded, athletic fellow who often finds himself facing off with Tiny-Handed Strong Bad, a Card-Carrying Villain who likes messing with him. 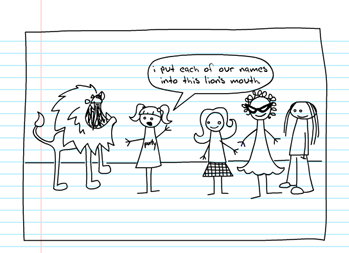 Cheerleader, So and So, The Ugly One, and What's Her Face, shortly before their demise.
Debut: "Email comic"

A badly-drawn comic made by Strong Bad. The main characters are 4 girls who only want one thing: Boys. Lots and lots of BOYS. However, more often than not, everybody dies before this is accomplished. See its own page for applicable tropes. 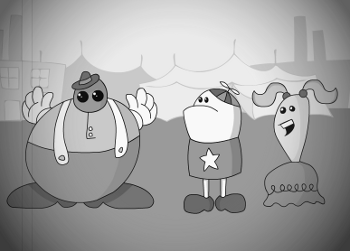 Fat Dudley, The Homestar Runner, and Old-Timey Marzipan
Debut: "Kick the Can"

The universe in the style of 1930s cartoons. As in the original children's book, Homestar is "The" Homestar Runner. The characters have to deal with economic hardship as well as the schemes of the Old-Timey Strong Bad. Other recurring characters include The Homestar Runner's friends Old-Timey Marzipan and Fat Dudley (Pom Pom), Strong Bad's lackeys The Sneak (The Cheat) and The Strong Man (Strong Mad), Sickly Sam (Strong Sad), the Fort Wayne Locomotive (Coach Z), Old-Timey Bubs, Mr. Shmallow (Marshie), and Rumble Red (probably Nebulon). Old-Timey versions of the other characters also show up in most episodes. 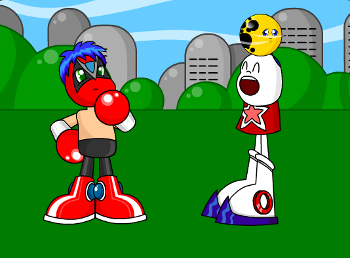 The Animesque 20X6 is the future where all the Homestar characters have Japanese cartoon versions of themselves. Here, everyone seems to be obsessed with challenging, especially Stinkoman (Strong Bad). There is currently a game, in which Level 10 has been in the works for... a while now, not getting released until December 2020. See its page for applicable character tropes. 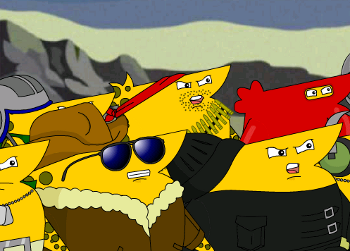 An Affectionate Parody of G.I. Joe and other Merchandise-Driven cartoons from The '80s. Every character (not counting the voice actors and A. Chimendez) resembles The Cheat. See its own page for applicable tropes. 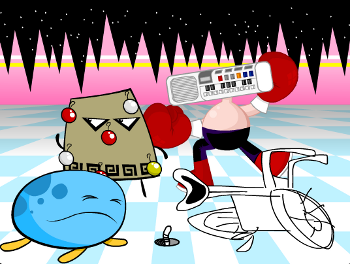 When Strong Bad is challenged by a viewer to make "[his] craziest cartoon", the result is something so bizarre even he doesn't understand it. Sweet Cuppin' Cakes is apparently about a half-cow/half-helicopter creature who tries to get a little worm out of the ground, and a wheelchair (voiced by Bubs) who chases a talking trapezoid named Eh! Steve... but who can tell? Strong Bad himself is also a character, except his head is an old keyboard that plays the demo music when he gets angry. 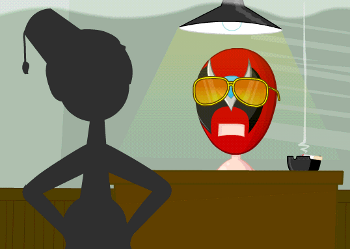 A character played by Strong Bad in a trilogy of home movies produced, written, directed, and starring himself. He's a private and/or police detective who doesn't play by the rules, aided by his sidekicks Renaldo (played by Coach Z) and Dangeresque, Too? (played by Homestar). The rest of the cast play various supporting roles, and Strong Sad plays pretty much everyone's beleaguered stunt double, mostly against his will. 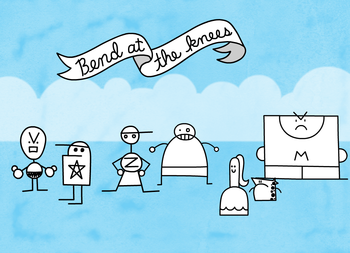 A universe in the style of a TV show, best described as "unbelievably soothing children's programming".