In the HR world, many of the characters tend to treat other objects like they were people. Some of them actually might be.
Strong Bad's Computers

All of Strong Bad's ancient computers seems to have their own minds, and they all seem to hold grudges. Although the deaths of the Lappy and Tandy didn't bother him much, the Compy being shot affected him greatly. He started off with the green-screened Tandy 400, until it blew up, then moved to the Compy 386, which was shot by Bubs after getting infected by over 400,000 computer viruses, and then the Lappy 486, which Strong Bad blew up. He then switched to the Compé, but he only answered 3 emails on it before he let it collect so much dust that it was compressed into the Lappier, which he now uses.

Two perspective-altering printers and a pop-up balloon. They usually appear at the end of an email to prompt an email to Strong Bad.

It's a stick. Designates the local cool hangout for the Brothers Strong.

Marzipan's appliances, who Homestar thinks are people (as he recruited Frank Bennedetto, a popcorn machine, for his "Homestarmy"). Other members include Mrs. Bennedetto, Marzipan's microwave, and others, Frank's "brothers", referred to in Strong Badia the Free. Mr. Bennedetto owes Homestar five bucks. 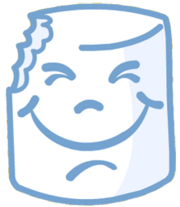 A floating marshmallow with a face, Marshie is the annoying, overbearing and more-than-a-little disturbing mascot of Fluffy Puff Marshmallows. Marshie is desperate to get kids to like him, but his overbearing attitude, bizarre sense of advertising aesthetic and sheer innate creepiness make him universally despised. In particular, the normally good-natured Homestar hates Marshie because he took his job as the Fluffy Puff spokesman.

An armless green critter who turns up most Halloweens, the Goblin looks around, does a dance, and disappears for another year. The rest of the characters don't seem to like him that much—until he saves them from a Carnivorous Undead Sheep in "Most in the Graveyard

A scrapped taller looking character resembling Homestar, only blue and with an overbite. He appeared once on a now hidden trading card animation, in the background of the game Dancin' Bubs, and as a silhouette in "A Decemberween Mackerel". Matt said in an interview that he was made after a friend thought their website was called "homeschoolwinner.com". They describe him as incredibly smart and more than a little creepy.

I got the heart of a lion and the wings of a bat—BECAUSE IT'S MIDNITE!
Debut: "Email band names" (mentioned), "Email monster truck" (in-person)

The greatest hair metal band in the world (at least in Strong Bad's eyes), made up of brothers Larry (vocals), Gary (lead guitar), Perry (bass), and Mary (drums) Palaroncini. They sing songs about love and living in the fast lane, do gigs in Free Country USA and beyond, and have never quite left 1987. They had their own Saturday morning cartoon show in the '80s that was canceled before the first commercial break. Their manager is the nerdy Teeg Dougland, and Strong Bad is their biggest fan.

A little green alien who floats around in outer space. No one likes his style.

"Cargeenan, Monteljohn, can you detect me to the nearest bus stamp?"
Debut: "Email kind of cool"

An older, vaguely sleazy man who constantly uses nonsense-words. Strong Bad looks up to him; Marzipan looks down on him. While he lost the non-sequitur championship to Homsar, he's still not exactly known for his eloquence. He carries around a grocery bag full of melty candy bars that he eats loudly while standing to close to people.

An alternate version of Bubs with two dot eyes, a set of fangs, and a unicorn-type horn coming out of his head. Unlike most of the H*R cast, he's voiced by Mike instead of Matt. Like the regular Bubs, he runs (or claims to run) a concession stand (in his case, called "Eight Burgers"). As with most of Mike's characters, his appearances are few and far between. With the exception of his debut in Theme Park, he has only appeared as a puppet or as a voice on the DVD commentaries.

Looks and name aside, his personality is only marginally similar to his better-known counterpart. Think of a slightly more articulate version of Homsar or Senor Cardgage and you're probably on the right track.

The brothers came up with the character after a Chinese toy designer sent them prototype plush toys of some of the characters. They were very amused at how the designer misinterpreted Bubs's eyes and mouth and decided to work him into one of their upcoming cartoons (The Theme Park email). They initially put him in a cartoon as an Affectionate Parody of unlicensed toys. However, every appearance since then has been as a character (complete with spoken lines) as opposed to just being a prop.

The King Of Town's Servants

The King Of Town's Servants

The King Of Town's servants (or his men) consisting of the Poopsmith, the Knight, The Hornblower, The Cleric, The Blacksmith, and The Little Chef Guy that serve the King Of Town in whatever misadventure he gets into.

A stick-figure dragon with one beefy arm drawn by Strong Bad when a fan asked him to show his "skills of an artist", Trogdor is a monster who comes in the night, burninates all the people who live in thatch-roofed cottages, and generally terrorizes the land of Peasantry. Created as a one-off joke, Trogdor proved immensely popular thanks to his rocking metal theme song and soon starred in his own video game, and the legend grew from there. A full-length text-based Adventure Game, Peasant's Quest, introduced the heroic peasant Rather Dashing, who will stop at nothing (sans burnination) to stop Trogdor.

Debut: "Teen Girl Squad 13"
A popular rapper who specializes in guest appearances, even guest-starring in his own album.
Crack Stuntman

Debut: "Marzipan's Answering Machine Version 14.2"
The voice actor of Gunhaver from Cheat Commandos and a spokesperson for Pistols for Panda.
Humidibot

Debut: "Fan Costumes 2015"
A robotic (de)humidifier. Little is know about him other than that he has a girlfriend named Humidibeth and that he likes to tell people his name.
Dijjery Doo

Debut: "Homestar Runner Goes for the Gold"
A brown, vaguely mammalian creature with large ears and tusks.
The Videlectrix Guys
"You don't design graphics!"
"You don't?"
"You progrum them!"
Debut: "Peasant's Quest Preview"
A pair of game devs that develop the various Retraux games on the site.