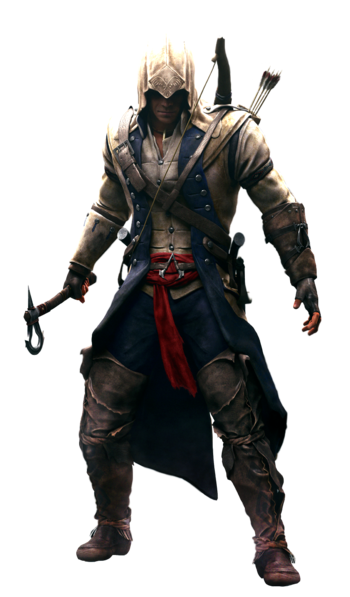 "It is better to have faith in something than none at all."

"All people should be equal and not in turns."

An ancestor of William and Desmond Miles, Ratonhnhaké:ton (who adopted the name "Connor" to ease communication) is a Kanien'keha:ka (Mohawk) born from a Native American mother, Kaniehti:io, and an English father, Haytham Kenway. He had a turbulent childhood that saw his tribe destroyed by colonial forces, and his hatred of tyranny led to his recruitment by the Assassin Brotherhood in 1770 and his subsequent involvement in the American Revolutionary War. 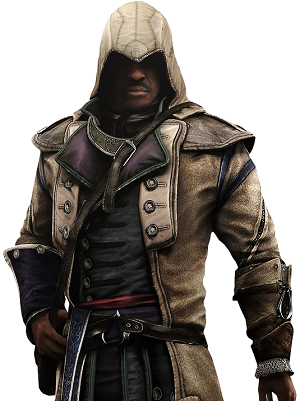 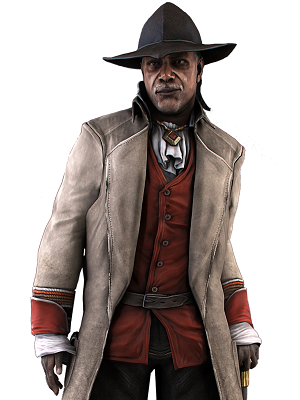 "Let me tell you something, Connor: Life is not a fairy tale and there are no happy endings."

A Master Assassin of British and Caribbean descent and a student of Ah Tabai, he is the mentor of Connor and formerly Shay, residing at his homestead. By the time Connor finds him, he has become a broken shell of a man who oversaw the utter destruction of his Order at the hands of the Templars and has lost the will to fight. 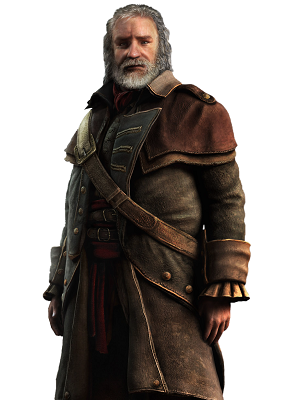 The first mate on the Aquila, Faulkner joined the Assassins in 1753. He resides on the Homestead next to the Aquila's dock and helps Connor gather a crew for the vessel to combat the Templars at sea. 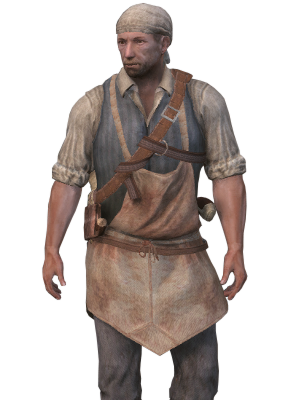 "We are not English! We are not the King's men! We are free!"

A immigrant from Montréal to Boston. After he is robbed and oppressed by Templar agents, Stephane swears his allegiance to Connor, becoming his first Assassin recruit. 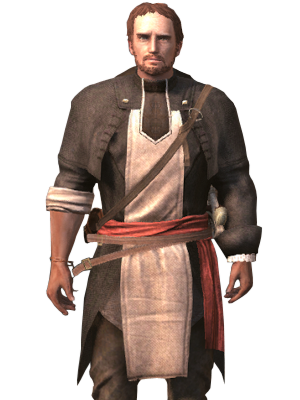 "Stories change, Connor. The way people tell them evolves. It's no different in the Bible and I believe that's the real root of all the strife back home." 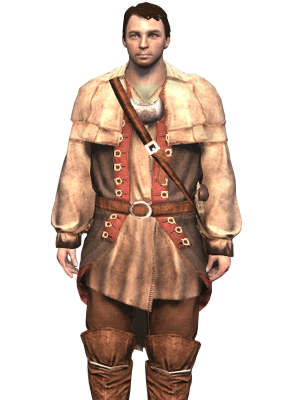 "My family's for the King. I just don't like seeing boys forced to fight against their will is all. But I know that I want to be free, for all to be free."

A surveyor and hunter from Virginia, Clipper joined the Assassins' after Connor helped him stop the forced recruitment into the British army of men in south Boston by Templar agents. 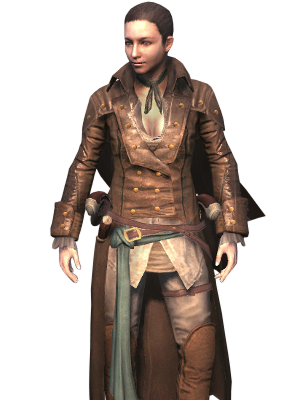 "It's nice to be a part of something. Until now I was sort of drifting about the neighborhood getting irate when I saw things unjust. Sometimes I'd intervene, other times I would come here. Now I feel like all my energy is pointed at something."

A courier in New York City, Deborah was an orphan who dressed as a boy to get work on the docks. When she got older, she became known as a problem solver in northern New York, looking out for the poor and underprivileged. She joined the Assassins' after Connor assisted her in stopping the exploitation of New York civilians by a Templar. 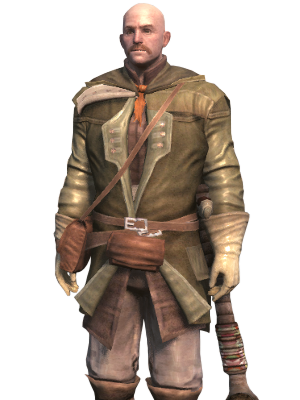 "I was a Hessian for a time. It was a good job while I had it. I only felt it was time for something different once I arrived. Not long after I am meeting you so it seems my feeling was useful, no?"

A German mercenary, Zenger left the army after arriving in New York, deciding he wanted to settle down on a farm. After that failed, he became a bodyguard in eastern New York, where he met Connor and joined the Assassins' while helping to stop a Templar British officer who was imposing martial law in the district. 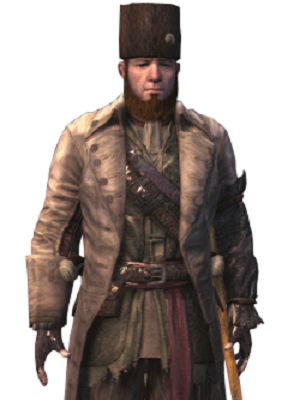 "I make my life up here now. I'm an Assassin. This is my family."

A doctor's assistant in western New York, Jamie joined the Assassins' while working with Connor to control a Templar arranged outbreak of smallpox in the district. 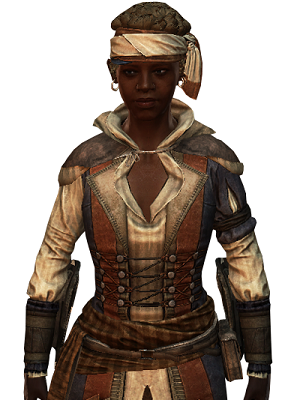 "You did not think I'd give up all my secrets so easily?"

Patience is a slave who leads a small group of runways. She is targeted by the Templar Edmund Judge in 1784 for a Piece of Eden she has, while also being sought out for recruitment by Aveline. 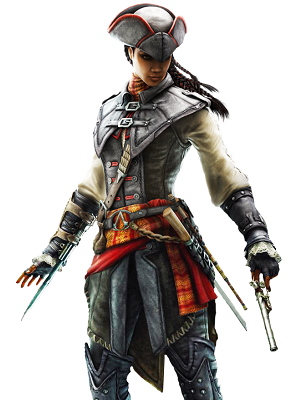 "I seek liberty and freedom, not for myself, but for those whom such fundamental rights are denied. I am their shield, their sword, their only hope. The roads I travel are dark, but they bring me closer to the light."

The daughter of an French merchant and former African slave in New Orleans, Aveline lived a privileged life that others like her could not. Her outspoken nature and vocal opposition to slavery was only allowed due to her father’s protection. She was recruited into the Assassin Order in 1759. 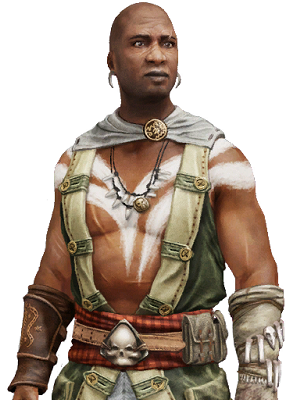 "I had a nightmare. I dreamt that you turned – no. Never mind. I wonder if you would humor your old mentor with a show of loyalty?"

The Mentor of the Assassin Order in New Orleans, Agaté is a former slave who escaped from jail and took refuge in the Louisiana marshes. He conflicts with Aveline over her impulsiveness and acting without consulting him. 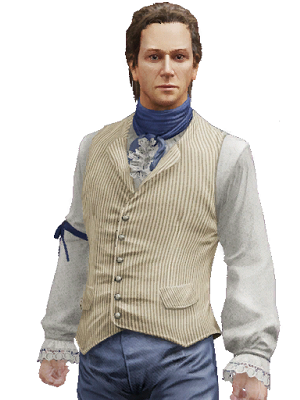 "I recognized a name – Rafael Joaquín de Ferrer – a known enemy. I don't know what his business is here, but we can be assured it's more than er... simple larceny."

An accountant who works for Philippe Olivier de Grandpré, he was recruited into the Assassin Order alongside Aveline and serves as a information officer.

A high-ranking Assassin entrusted with the Grand Temple Key. He is killed by Haytham Kenway in 1754 for the Key.

A sailor upon the Providence who attempted to assassinate Haytham while crossing the Atlantic.