The Team Benefactor
aka: The Rich Guy 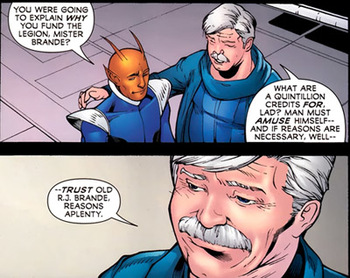 What are a few quintillion credits for, indeed?
Maria Hill: All set up, boss.
Tony Stark: Actually, [Steve]'s the boss. I just pay for everything and design everything and... make everyone look cooler.
— Avengers: Age of Ultron
Advertisement:

The Team Benefactor is the member of The Team who allows the adventure to continue by supplying some sort of resource they (and only they) have access to rather than their own talents (unless said talents are something very narrow). The resource in question might be;

This trope is a good way to justify The Friend Nobody Likes or an Indispensable Scoundrel, since it allows the writer to include a character that is at odds with the rest but they can't get rid of. Even if they're not, it's likely that what they provide is the only thing they can provide (at first), making them The Load. The expertise variant is the most likely to avoid this, since their knowledge might allow them to double as The Medic or a Gadgeteer Genius even if they aren't a Badass Bookworm.

Characters who provide money might overlap with Uncle Pennybags or Wealthy Philanthropist. A character with some sort of destiny in this position might be The Chosen Zero if they don't provide anything but their status as such. A character who merely gives the heroes what they need and sends them on their way (without joining them) is some form of Big Good rather than this trope. If this character joins the group as the Sixth Ranger then they might be a Mysterious Backer or an Anonymous Benefactor. They often appear in a Caper Crew. Compare Plot Tailored to the Party where it is contrived so each character can overcome an obstacle. See also Crimefighting with Cash (for when this trope is a superpower).

A supertrope to Beleaguered Benefactor.