Fanfic / Hail to the King (Thuktun Flishithy)
aka: Gods Angels And Kings 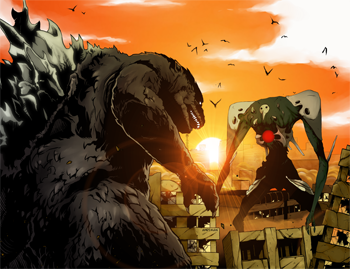 As he continued to ponder what had happened, his shock and confusion turned into rage. Something had done this to the world. Something had rendered the seas lifeless and upset the balance of nature that he had sworn to protect aeons ago. Something had killed countless humans and his friends as well.
Something had killed his son.
He roared again, an animalistic howl of rage that could be heard for miles around, the very sea around him trembling before its fury. He would find what had done this and make it pay with its blood. An evil on this scale could not go unpunished, he must destroy whatever had broken this world.
Advertisement:

What would happen if two of Japan's most famous franchises were to cross over? The result is Hail to the King

, written by Thuktun Flishithy (author of The Last Daughter). It is not to be confused with an MLP fanwork of the same name.

The basic premise of the story is that an accident during an experiment with the Dimension Tide accidentally sends Godzilla to the world of Evangelion, referred to as (E)Earth in-story, right before Sachiel attacks. Fortunately, he's a good guy in this one, on par with his Showa counterpart in terms of heroics.

Unbeknownst to anyone, someone else arrives on (E)Earth and ends up physically bonding to the nearest available human: Shinji Ikari. As Shinji and everyone else tries to come to grips with the new situation, Godzilla decides to teach the Angels who the real King of the Monsters is.

The author started out a remake titled Leviathan. However it introduces considerable changes since the first chapter (such like Shinji bonding with someone else Ultraman and the kaiju were native to the Evangelion universe, and were also affected by Second Impact), and it seems to aim to be its own beast. It can be read in FF.net