Welcome to the Caribbean, Mon! 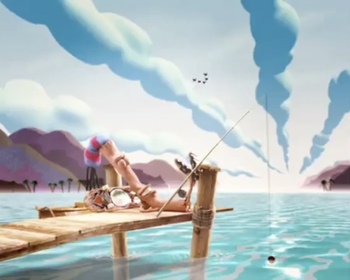 You may recognize it from a certain movie that didn't take place in the Caribbean...
Advertisement:

A chain of tropical paradises mostly between Florida and Venezuela. The Caribbean is known for cruises, beaches, resorts, and the occasional pirate infestation. Beware of The Bermuda Triangle, while you're at it, too. Includes The Bahamas, Jamaica, Virgin Islands, Trinidad and Tobago, the Cayman Islands and others.

Calypso or rhumba music is constantly being played, there's free fruit everywhere, everyone is constantly drunk and/or high, and may have a pet parrot. Nobody does any work, they just sit on the beach sipping fruity little drinks with umbrellas out of coconuts. At night, the careless or unlucky might see a voodoo ceremony.

Pirate attacks have to be dealt with, even in modern times. Except now they use machine guns instead of cutlasses and are less romanticized.

This trope for the most part excludes the Latin Caribbean islands such as Cuba, the Dominican Republic, Haiti (which is Francophone), and Puerto Rico (a territory of the United States of America, an Anglophone country), and includes the British Overseas Territory of Bermuda in Northern America,note Bermuda is much further north than the Caribbean itself and considered part of Northern America/North America proper, being located east of the US in the middle of the North Atlantic Ocean, but is culturally Caribbean and an associate member of CARICOM the Central American country of Belizenote An Anglophone country in Central America and one of the two Anglophone countries (the USA being the other) that Mexico borders and the Guiana countries of Guyana and Suriname in South America. Jamaica is a specialized case, mostly due to a perceived abundance of Reggae and Rastafari folks with a penchant for the "Wisdom Weed". The Bahamas is often mistaken for Jamaica much to the chagrin of BOTH countries' citizens. This is despite, however, a minority of Rastafarians in Jamaica.

If you find white people here in contemporary times they're likely to be sitting on a yacht, playing croquet or cricket, or lounging around in white suits and reading a newspaper in the lobby of a hotel that's seen better days. This is often used as the final scene of a movie, illustrating that a Karma Houdini character made a successful Run for the Border. That, or they're probably American college kids who came down to one of the islands' many all-inclusive resorts for spring break because the drinking age is lower.

Also known as The Spanish Main (even though that term

refers only to the Carribean coast of mainland Central and South America). Because it used to be full of Spaniards and their loot.

A subtrope of Tropical Island Adventure. Expect the soundtrack in this setting to be Steel Drums and Sunshine. Has nothing to do with Mons visiting Caribbean, mon.

Alternative Title(s): Welcome To The Caribbean Luv, The Spanish Main