Literature / The Long Way to A Small, Angry Planet 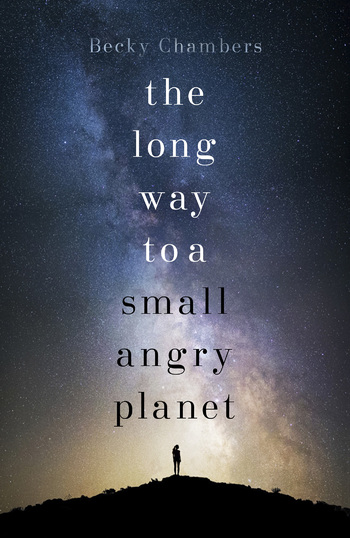 "Scared means we want to live."
From the ground, we stand;
From our ships, we live;
By the stars, we hope.
— Exodan proverb
Advertisement:

The first novel written by Becky Chambers, The Long Way to A Small, Angry Planet was published in 2014. The book follows the crew of the Wayfarer, a ship employed in building "tunnels" through space to connect distant reaches of the Galactic Commons.

The book opens with the new addition of Rosemary, a somewhat sheltered human clerk, to the multi-species crew including: lizard-like pilot Sissix; Dr. Chef, who is one of the last of his race and the ship's doctor and chef; Ohan the Navigator, whose species is infected in childhood with a parasite that lets them understand time and space but slowly kills them; Lovelace the AI; the human captain Ashby; the engineers Kizzy and Jenks; and the obnoxious misanthropic algae-specialist Corbin.

As Rosemary is acclimating to her new home on the Wayfarer, Ashby accepts a once in a lifetime opportunity to build a tunnel to the Galactic Core, impenetrable until now due to control by a violent and largely incomprehensible race, who are only now reaching out to contact the GC.

The first entry in the Wayfarers series, it has three sequels:

In General
The Long Way To A Small, Angry Planet
A Closed and Common Orbit
Record of a Spaceborn Few
The Galaxy, And The Ground Within