Strong-Willed Shadow
Kurohebi
"This is unfair! Fighting me after I had already been weakened!"

An Artificial Human created by Tsubakura and Suzumi and trained to be an assassin. Only interested in fighting, they are cold and distant to everyone, but is very loyal to their creators. Their birthday is around November 22

Weak-Willed Youngest Child
Aoji Shitodo
"It's Aoji. I'm sorry, I have such a tough name to remember."

The youngest of the Shitodo trio. They have the ability to create whirlpools, can summon odd creatures from portals and has a shy, meek personality. Their birthday is around January 4. 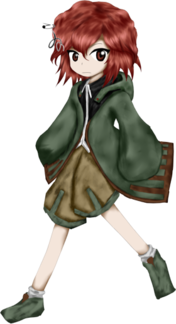 The middle sibling of the Shitodo trio, who is a magician that specializes in reading the mood and magic that uses heat. They have an easygoing and lazy personality. Their birthday is around April 7.

Ambiguously Paper-thin Archeologist
Kuroji Shitodo
"I would have been fine if it had been just Tsubakura, but...Well, perhaps this is just a natural consequence..."

The eldest of the Shitodo trio, who specializes in reversing things front and back. Kuroji is an honest, hard-working, honor student type but for some reason they and Tsubakura don’t seem to like each other. After being spirited away to Mugenri and forced to find a house and profit on their own, they work as a youkai exterminator; but eventually their greed and desire to be special and recognized force Kuroji to do more amoral things with each incident. Their birthday is around September 9. 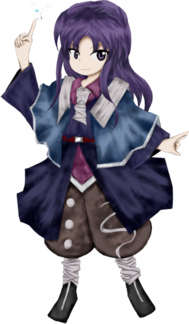 Eternal Senselessness with a "Chaotic" Alias who Manipulates Gravity at Will
Clause
"Now, shall we begin? Do you have the necessary "resolve"?...You powerless little bird!"

A delusional, eccentric person who like everyone else, was spirited away to the land of Mugenri. They decide to attack Yabusame and the fake Tsubakura after believing that the portal to the Senri Shrine is a star that will grant them power. Fails and is never heard of again until they return in "Brilliant Pagoda or Haze Castle", where they spend the neutral route hunting down Fumikado. Their birthday is around August 24. 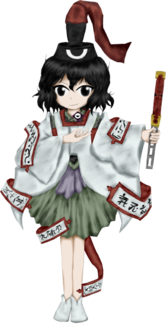 Inexplicable Hakama
Tsurubami Senri
"Oh my~ You're so strong~ Even more so than I thought."

A human priest from Mugenri, they run the Senri Shrine. They;re the highest authority in Mugenri and together with their friend Tenkai, they performed youkai extermination and maintained peace on the land.

During Evanescent Existence they take Tsubakura’s appearance in order to get a fight with the real one and Yabusame and force them to replace them as the protector of Mugenri for a while.