The Main Characters and Outsider Humans

These are humans Tsurubami spirited away into Mugenri, often because they have a power to unlock (Yabusame, Aoji, Hooaka), had a terrible life in the Outside World (Kuroji, Clause), or because they're The Chosen One to resolve an incident (Tsubakura). Tsurubami is spiriting them away to restore the peace of Mugenri while they're out for a while. However, most of these humans are ....not the best of people.

Tropes associated with the humans: 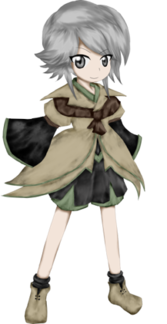 Flawless Thoughtlessness
Yabusame Houlen
"I'm full now so I'm ready to beat you up whenever!"

Main protagonist of the Len’en series in general. They are an airheaded, dimension-warping human who loves causing mischief and interrupting events. Their birthday is around November 26.

A young prodigy and second protagonist of the Len’En series. They are a blunt scientist that creates danmaku and has an Odd Friendship with Yabusame. Their birthday is around October 10