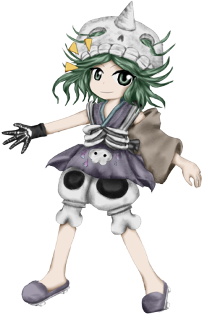 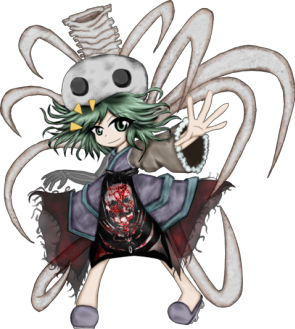 Click here to see Sese as a playable character. [[quoteright:243: 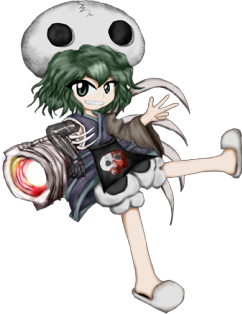 A Corpse in Search of Themself
Sese Kitsugai

A gashadokuro who excavates the underground searching for bones in order to became stronger and regain their original form. 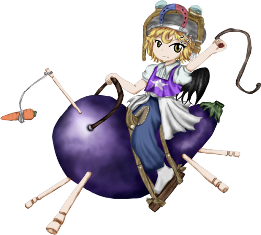 A jockey youkai who was hired by Iyozane to herd the spirits for their resurrection ceremony. Has the ability to ride on everything. 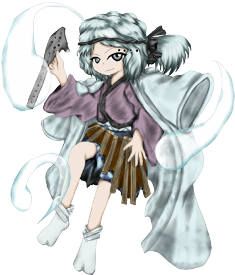 Anachronistic Ambitious Person
Fujiwara no Iyozane
"When that person revives at dawn and becomes the emperor of the Mugenri Village, I'll become their chief advisor."

A Fallen Prince/ss who now lives a humble life. They team with Fumikado and helps them with their resurrection ceremony, hoping to become their chief advisor and slowly regain what they lost. 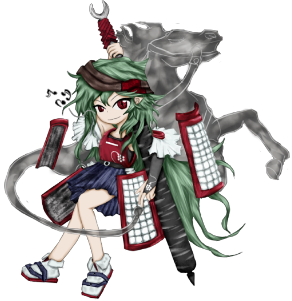 An orphan who was adopted by their grandfather. Said grandfather was an alchemist demon hunter who wanted to resurrect the "True Emperor", Taira no Masakado

. For this, he created an homunculi with the corpse of a demon child. Unfortunately, he died before being completed, so Fumikado devoted their life to complete the homunculi and to transfer their soul to it. Unfortunately, their plan was thwarted and they had to wait for several years.

They are incredibly vain and proud despite their relatively low position in the hierarchy of Mugenri, (falsely) claiming to be a descendant of Taira no Masakado himself. 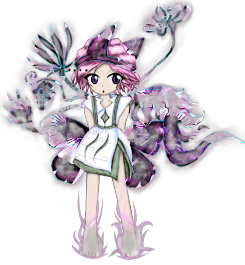 A youkai born from the evil flower Harujion, a strange flower that rarely blooms in Mugenri. Every time it blooms, it is quickly disposed off by Tsurubami. However, since they are currently on holiday in the Outside World and forgot to warn Yabusame and Tsubakura about this, the Harujion blooms once again without anyone to stop it. It blooms next to Fumikado's resurrection ceremony, provoking that an amount of spirits were absorbed by the flower, creating Shion. 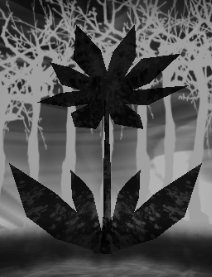 That Which Grants that Which is Dead
Harujion

An evil daisy (a Philadelphia fleabane

, to be exact) that blooms only one time in several years at a random place in Mugenri. Every time it blooms, it was quickly disposed off by Tsurubami, because it can be used for malicious uses and the Harujion needs to absorb the vital energy from all living beings around it to be able to grow up. Because Tsurubami isn't there when in blooms again during Reactivate Majestical Imperial, it blooms freely and the amount of spirits it absorbed created a physical body, thus Shion was born. 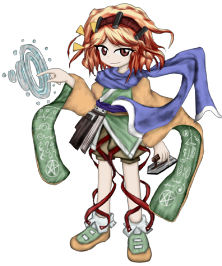 One of the Old Dictators
Tenkai Zuifeng

An apprentice of the barrier builders from Azumaterasu in the Outside World. They have the power to produce barriers, shared by Yabusame, but due to a better work ethic they can use it far more effectively. They're also Tsurubami's best friend and ally. Now that the priest is on vacations, their rule has collapsed so Tenkai wants to put everything into its former order.