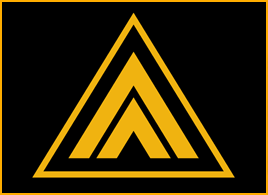 A set of characters whom appear in the slightly altered/rewritten timeline throughout Season 4. Only characters who are substantially different, or play different roles compared to their prime timeline selves will be listed here - and only the differing tropes. 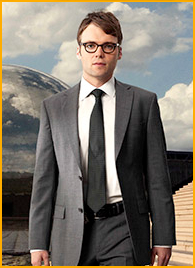 "Hey! Hey, you look a little freaked out. You wanna talk about it?"

"You understand what you're saying? Those families are going to spend the rest of their lives wondering what happened to their loved ones, looking for answers. Can you imagine what that would be like? To have that... that hole in your life."

A minor character in the original timeline, where his first experience with Fringe division was solving the case and mystery behind Dana Gray's apparent immortality. Despite his inexperience with dealing with the strangeness that Fringe Division deals with daily, he quickly demonstrated himself as a brilliant investigator and ally, establishing a close friendship with Peter.

In the amber timeline, he joins Fringe Division after the death of his partner. 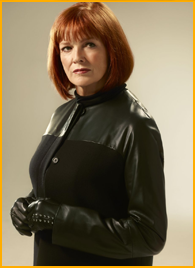 "I'm nothing if I can't be a resource for you."

"We create technology. How it is used is not our concern."

First Appearance: Season 4, Episode 1: "Neither Here Nor There"
Episode Appearances: 13 of 100

The CEO of Massive Dynamic following William Bell's death. She is close to Olivia, and has raised the Dunham sisters since they were children, but has a stormy relationship with Walter.

Following Jones' downfall and Bell's disappearance...again, she has been offered an executive position in Fringe Division by both Broyles and Senator Van Horne. What happened between then and 2036 that landed her in a wheelchair is a mystery.

See Main Characters: A Side (Seasons 1-3) 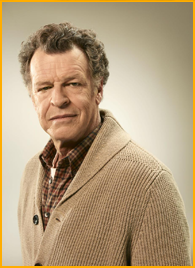 "Tell Agent Broyles that science has no price tag!"

"She bought my ignorance with baked goods while she carried out her plan to steal pieces of the machine with the — it was that damn Portuguese sweet bread!"

The brilliant scientist who once worked with William Bell, Walter has spent 17 years maximum security mental institution but now he works with Fringe Division. The death of his son (and the subsequent death of alternate Peter) has been eating away at him for decades, and he has now become something of a paranoid trainwreck who refuses to leave the safety of his Harvard lab. 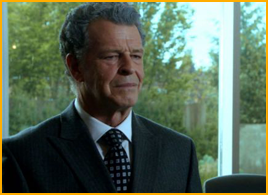 "Everything is not as it seems."

"Well, the outcome is still the same. I couldn't save our son then. And I can't help him now."

The current Secretary of Defense, the alternate Walter Bishop is the direct head of Fringe Division. He has begrudgingly accepted cooperation between the two sides to fix the problems of their worlds, but he still seems to be keeping some secrets... 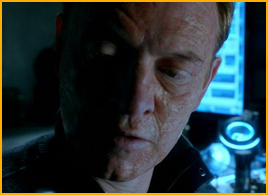 "Take Me to Your Leader."

"I’m sure you have an abundance of questions. But I doubt I'd answer any of them. Besides which, we don't have much time. I imagine you'd like to avoid unnecessary deaths."

First Appearance: Season 4, Episode 8: "Back To Where You've Never Been"
Episode Appearances: 5 of 100

Jones again, and back pulling Big Bad duties once more for the fourth season. A biological terrorist extraordinaire, not much is known about him except that he is the one behind the human based shapeshifters, and that he is slowly replacing high-clearance individuals with his copies. 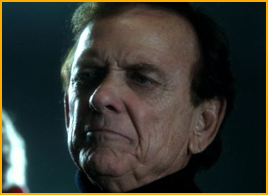 "When she wakes up, she's gonna have one hell of a headache."

"Maybe confusion's an unforeseen side effect?"

Jones's right-hand man, and occasional grunt for the alternate Nina Sharp. He handles most of their dirtiest work. 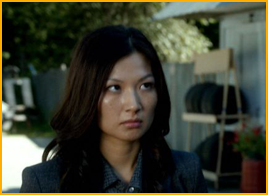 "Finish what you started. I won't ask again. "

"One man shouldn't stand in the way of progress, not even William Bell."

First Appearance: Season 4, Episode 1: "Neither Here Nor There"
Episode Appearances: 3 of 100

An agent of the new human-based shapeshifter force. She was shot and killed by Peter after Jones made his grand debut and escape.

Tropes associated with the Shapeshifter: 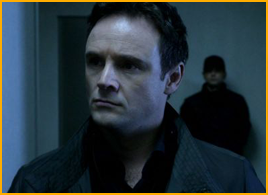 "He promised he would come for me. To fix me."

"I needed to be more than I am. Something unique. Doctor Jones understood that. He promised to make me like no one else. I was to be the first of a new breed of human beings. But I was a disappointment."

First Appearance: Season 4, Episode 17: "Everything In Its Right Place"
Episode Appearances: 1 of 100

The first human-based shapeshifter created by Jones. He was, essentially, a failure - he can't hold a single form for too long, nor can he survive without a form. After he was tossed away by Jones, he survived by preying on rapists and serial killers as they were preying on their victims - rescuing them, and taking on the offender's form in the process. Following a nice lecture from Lincoln after he was captured, he completly defected and helped apprehend "Meana". He's currently working with Walter and Peter to find a way to stop Jones. 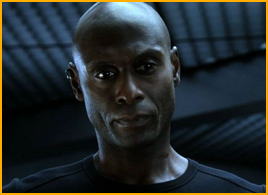 "I buried an agent today. A good man. And I’m also well aware that Agent Lee isn't the first casualty of our... collaboration. Some day I’ll have to account for what I’ve done, but..."

First Appearance: Season 4, Episode 8: "Back To Where You've Never Been"
Episode Appearances: 5 of 100

The head of Fringe division on the alternate side. In exchange for curing his son, he acts as a mole for Jones. 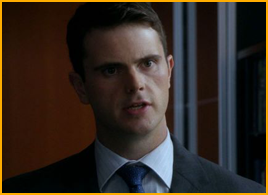 "I examined the shapeshifter tech in detail. I saw nothing to indicate you had anything to do with it, sir."

"I’ve identified a signal that we might be able to trace. If I’m right, it should lead us to whoever's responsible for these new shapeshifter prototypes."

First Appearance: Season 4, Episode 8: "Back To Where You've Never Been"
Episode Appearances: 1 of 100

The chief scientist of the Department of Defense. Or would be, if he wasn't replaced by a shapeshifter. Is rather quickly disposed of and dissected by Walternate. 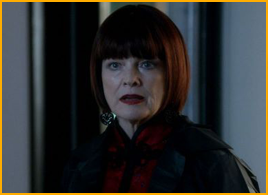 "She needs Peter Bishop. Apparently, she can't be activated unless he's present."

"You really have no idea. Philip is irrelevant. He's just another pawn. This changes nothing, Agent Dunham. I know Jones, and he will come for me."

Nina Sharp from the alternate universe. For some reason, she has allied herself with David Robert Jones with the goal of activating Olivia's unique abilities, pretending to be the real Nina who was kidnapped by Jones. They succeeded, but at the cost of pretty much all of their men and one of their hideouts.

In the end however, she was betrayed by Canaan and arrested. 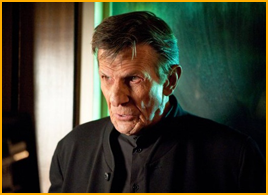 "It's done, Walter. The final piece has been set into motion. I couldn't stop it now if I wanted to. And I don't! As scientists, we're taught that fate is nothing more than the convergence of a set of probabilities into one potential outcome... that there's no such thing as Divine Intervention. And yet I’d be lying if I said that the circumstances that brought you here to witness this with me, my trusted colleague, my dearest friend, didn't feel like the Hand of God."

Walter's old partner. He was thought to have died seven years ago of Lymphoma (or rather, chose to die in a car crash instead), but is revealed to be very much alive, and in charge. David Robert Jones is revealed to be truly working for him in an effort to collapse the two universes to create a new one. ...Or so he thought. Knowing William, he has has something bigger in store. He also bears an interesting connection to The Man In The X T-Shirt...