Theatre / Who's Afraid of Virginia Woolf? 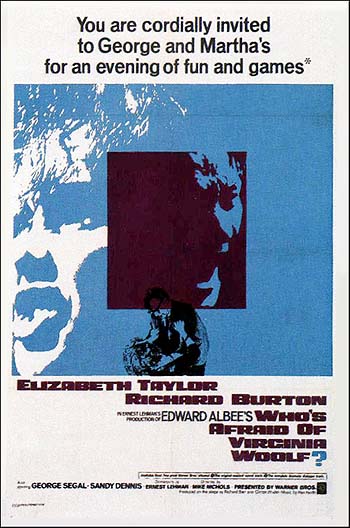 "I swear, if you existed, I'd divorce you."
—Martha
Advertisement:

A classic 1963 play by Edward Albee, which in turn spawned a classic 1966 film directed by Mike Nichols and starring Richard Burton and Elizabeth Taylor, with George Segal and Sandy Dennis co-starring.

This character study follows George, a "boring" middle-aged history professor at a small New England college, and his caustic, abusive wife Martha. Martha invites another, younger professor, Nick, and his meek and mousy wife, Honey, into their home one very drunken very early morning. The older couple verbally spars in front of their guests, and then gradually turns their abuse — and lust — onto them.

The play won several important dramatic awards, including the Tony Award for Best Play (its cast and crew also won several other major Tonys, including Best Direction, Best Production, Best Actor, and Best Actress). It was also selected for the Pulitzer Prize for Drama by that year’s drama jury, but the jury was overruled by the advisory board, who objected to its profanity and sexual content; correspondingly, no prize for drama was awarded that year.

The film was nominated for every single Academy Award it was eligible for, winning five, including Best Actress and Best Supporting Actress for Taylor and Dennis respectively; it is generally considered Taylor’s best performance. (Dennis had also won a Tony Award in 1963, the same year the play won its Tonys, but hers was for A Thousand Clowns.) It was also a major step in the unravelling of The Hays Code, as it featured dialogue that was profane and extremely sexually explicit by contemporary standards and was released with almost no changes (to the point where it was the first film to ever be rated R by the MPAA, even before its rating system was formally established). Later in 1966, MGM released Blowup without Hays Code approval, which effectively marked the end of the Code.