"Like my scrotum, here it is in a nutshell!" 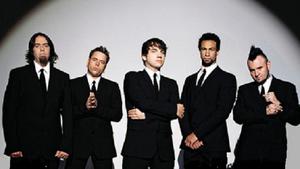 No reason to live, but we like it that way.
Advertisement:

The Bloodhound Gang were a rock band formed in 1991 in King of Prussia, Pennsylvania (a western suburb of Philadelphia).

The band started as a hip-hop group consisting of lead singer James "Jimmy Pop" Franks and Michael "Daddy Long Legs" Bowe before becoming a Rap Metal band and eventually a more traditional rock band with a DJ, with Franks being the only consistent member in the 20 year career. As such, their style tends to be a little all-over-the-map, but it's tied together by their lyrics. Usually considered more of a comedy band than anything, the Bloodhound Gang specialize in off-color humor, dick jokes and many, many, many puns.

Following some controversial on-stage antics during a performance in Ukraine

, the band broke up in 2013 (though they still did an album two years later). Bassist "Evil" Jarred Hasselhoff was quoted as saying "If the Bloodhound Gang still exist, yes, I'm still a member."

The Bloodhound Gang shows examples of:

This is Bam, and Hidden Track shit dicks out.