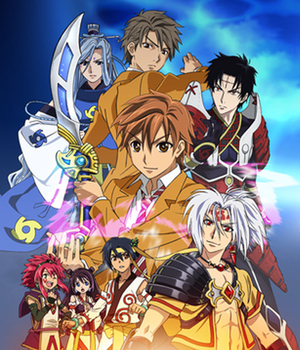 Arata: The Legend is a shounen manga by Yuu Watase about two teenage boys from different worlds, both named Arata, who magically trade places.

The first Arata we meet lives with his grandmother Makari and childhood friend Kotoha in a magical world where gods inhibit swords named Hayagami and let their chosen wielders, named Shou, use their special powers. Arata is the next in line to become the princess, the world's ruler. Too bad he was born a man, so he has to crossdress and hope nobody finds out, in which case he will be executed. However, during the crowning ceremony he is not only exposed, but the current princess Kikuri is assassinated and Arata gets the blame. As he tries to escape into a mystical forest, he is swallowed by trees.

The other Arata, last name Hinohara, lives in modern day Japan with his parents and younger sister Nao. We meet him on his first day of highschool, where he quickly becomes popular after catching a groper. Not long afterwards, a dedicated bully named Kadowaki, who traumatized him in middle school, transfers in and completely ruins his reputation. When Kadowaki gets even his last friend to betray him, Hinohara wishes he would just disappear, and he somehow gets swallowed by an alley.

The two Aratas then end up where the other left off, and have to solve each other's problems. By the power of the forest, nobody is able to tell the two are different people; in their eyes, they see the Arata that is native to their world.

Titled Arata Kangatari in Japan, it was licensed by Viz Media as Arata: The Legend. It was initially serialized on their Shonen Sunday site

before that quietly stopped updating, but Viz continued to publish the physical volumes. The series is currently on hiatus at 24 volumes since 2015.

A TV anime adaptation by Satelight and JM Animation aired as part of the Spring 2013 season.

Note: To stifle confusion for editors and readers alike, the Arata from Amawakuni is referred to as Arata, while the Japanese Arata is referred to by surname.
Advertisement:

Arata: The Legend provides examples of: