open/close all folders
All in general
Voiced by: Nolan North 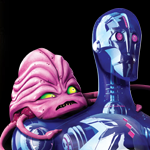 "The Turtles must be eliminated from all places."

A race of malevolent brain-like creatures from another dimension, they've been abducting and recruiting human scientists to help them modify their mutagen, which they plan on altering the Earth's atmosphere with. Furthermore, it turns out that the Kraang are nothing more but brainwashed Utrom, all under the inane thrall of a former Utrom scientist named Kraang, now going by Kraang Prime. 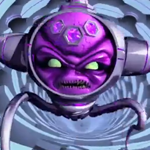 "Like all Kraang, I am Kraang. But you can call me Kraang."

Leader of the Kraang and mastermind of their invasion force. He was originally named "Kraang" and when he gains his psychic powers to mind control the other Utroms, they call themselves Kraang. 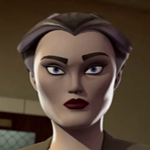 A research scientist from the World Wide Genome Project who takes a particular interest in April. She's really a Kraang-droid, minus the Kraang.

A rock titan from Dimension X. The Kraang summon him in "TCRI" as part of their takeover of earth, and he fights the Turtles before being sent back to Dimension X by Leatherhead.

A similar rock titan to Traag, who is partnered with him.

A huge aquatic beast the Kraang brought from Dimension X to guard their underwater base/Kraang-water production facility. The Turtles distract it to enter the base, but have to fight it to escape. 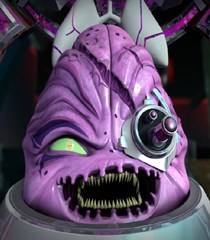 A scarred Kraang spy. He makes himself known in "The Invasion", when Irma is revealed to be him in disguise. 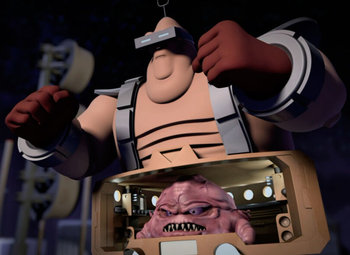 Kraang Sub-Prime's cousin and the Krang from the 1987 series. Having been banished to the 1987-dimension for being a failure, Krang continues his campaign of conquest alongside his version of the Shredder.