April's scientist father who gets kidnapped by the Kraang.

A robot turtle made by Donatello to fight in his place after he gets tired of breaking his bo staff. Later rebuilt as the ultimate sparring partner.

A blind noodle chef targeted by the Purple Dragons and later the Foot.

A Turtles Fanboy who is desperately attempting to be a superhero.

Voiced by: Kate Micucci/ Gilbert Gottfried (after The Reveal)

A larper obsessed with the role-playing game Mazes and Mutants who became a sparrow mutant after exposure to one of the scattered canisters of mutagen. He attempted to make the Turtles play with him by having them fight for their lives in a mental construct. After his game was beaten, the Turtles told him to stop forcing other people to play with him and parted with him on good terms.

He is first introduced in "The Kraang Conspiracy". April senses that somebody is watching them during a night time roof top training run, so they chase him down to his apartment where he tells them why April is so special to The Kraang, and that The Kraang have been on Earth for thousands of years. He later returns in "The Manhattan Project" and tells them the recent bout of earth quakes are being caused by giant alien worms called Kraathatrogon, which The Kraang milk like cows for mutagen.

As a whole
A small band of mutants who've all had their own interactions with the Turtles, now united by Slash. Formed as a response to the Kraang occupation of New York, they become stalwart allies to the Turtles upon their return to New York.
Slash

A mutant Turtle with a vendetta against Raphael's brothers and tries to become his new "partner". Eventually goes on to found the Mutanimals and is the faction's leader as a whole. 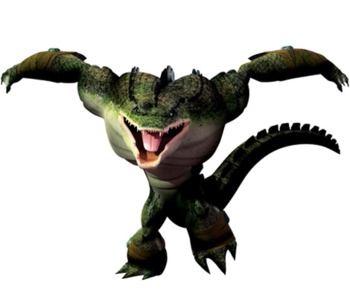 "Kraaaaang!!!"
A baby alligator the Kraang used as a guinea pig for the mutagen, and presumably other experiments. He managed to escape the Kraang, taking the power source for the dimensional portal with him.
Pigeon Pete

A mutant pigeon and ex-prisoner of the Kraang. He delivers a message to April from her father and helps her and the Turtles find him.
Dr. Tyler Rockwell

A scientist and former colleague of Dr. Falco. Used as a guinea pig for Falco's modified mutagen, becoming a mutant chimpanzee with psychic powers.

Muckman is Garson Grunge, a former sewer worker turned garbage man who is transformed into a lumbering mountain of muck and garbage after being hit by a canister of mutagen thrown through a window by Bebob/Anton Zeck during a fight with the Turtles.

A teen named Jason, he was a normal kid who enjoyed skateboarding with his pet gecko until about a year ago, when a vial of mutagen transformed him into a gecko. He was kicked out by his parents because of this, but he takes life in stride.

A female Salamandarian (the same species as Newtralizer) who first appears in "The Moons of Thalos 3". She's even stronger and more skilled than Raphael, which is why he falls for her.

In General
The Utroms are natives of Dimension X who resemble the Kraang. Unlike them, however, they are benevolent, and ally themselves with the Turtles. In truth, the Kraang are merely those mind controlled by Kraang Prime.
Agent Bishop

A chief agent of the Utroms, a heroic offshoot tribe of the Kraang who's been hiding on Earth trying to undermine the rest of his species. His human form is the template for all of the "Norman" bodysuits the Kraang use. 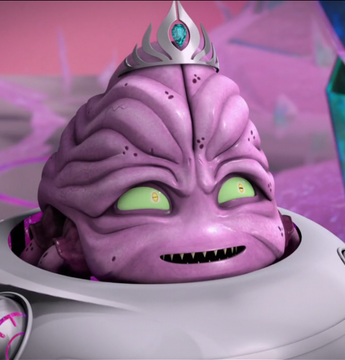 The Utrom Queen and member of the Utrom High Council. 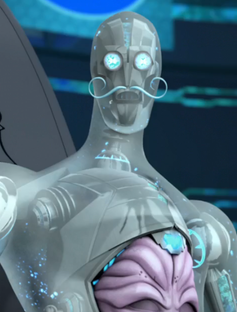 Another member of the Utrom High Council. 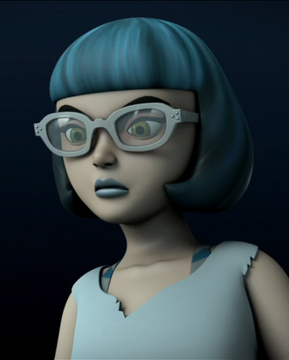 Another member of the Utrom High Council and the one who created the Irma suit until Kraang Sub-Prime stole it.

A commando unit trained to deal with alien menaces to the Earth. They first appear combating the Kraang invasion in "The Invasion". 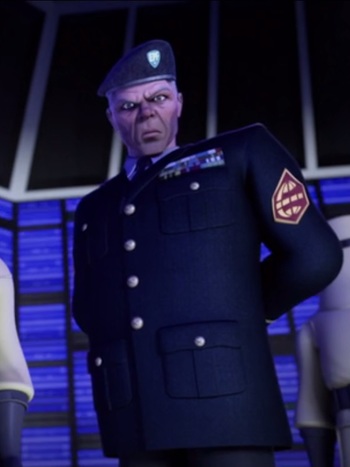 A general and the leader of the Earth Protection Force (E.P.F.), a global task force under the United States government whose mission is to protect Earth from any and all alien threats. Through Agent Bishop, Griffen has reached an agreement with the Utroms. In exchange for working with them, the E.P.F. have gained access to Dimension X technology.

Voiced by: by Yuki Matsuzaki 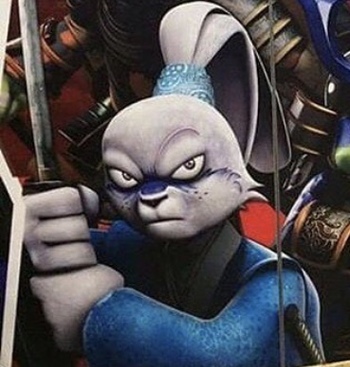 A rabbit ronin who lives in an alternate feudal Japan, which is accessed from Dimension X. He debuts in Season 5 in a crossover with his series.

A bear ronin who is responsible for raiding Kintaro's village in the Alternate Feudal Japan.

A cat whose village was raided by Jei's forces. She is a close friend of Usagi's and was Kintaro's guardian. She tasked Usagi with taking Kintaro to the Temple of the Sky Buddha when her injuries made travelling impossible for her.

A "golden boy" pug whom Usagi and later the Turtles are charged with protecting.

Introduced in the third season episode "The Croaking". A group of four mutant frogs and a legion of other frogs behind them. They once wanted revenge on the humans for deforestation, but have since become allies with the Turtles, particularly Napoleon with Michelangelo. 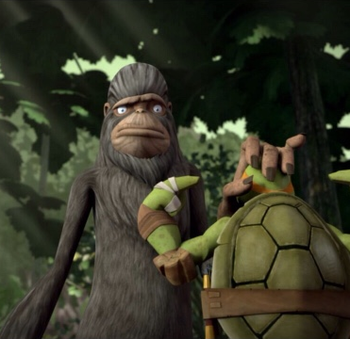 The legendary cryptid who gets befriended by the Turtles while she, yes she, is stalked by an insane hunter.

Dr. Cluckingsworth M.D. is a mutant chicken that served as the turtle racer A.I.

"This is so grokking cold!"
Voiced by: Ashley Johnson

A Timestress apprenticed to Lord Simultaneous who enlists the legendary Turtles' help to defeat Savanti Romero on several occasions.

An all-powerful master of time and space, and Renet's mentor figure.

The late wife of Hamato Yoshi, and the mother of Miwa/Karai. She sought to leave Japan for New York, seeking a safer life for her baby, and believing ninjutsu to be dead. Unfortunately, fate has something terrible in store for her, as she is the driving force of a love triangle between Yoshi and Oroku Saki that changes their lives forever. 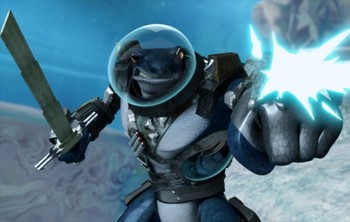 A male Salamandarian who is Mona Lisa's superior, and an experienced veteran of many fights.

A scientist whose mind was accidentally uploaded into a robot's, who comes to Earth to seek the Turtles' help against the Triceratons at the end of season three. He is also known as the Fugitoid. 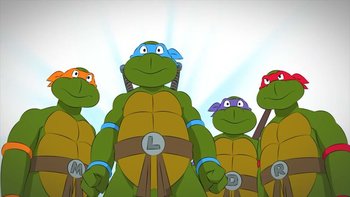 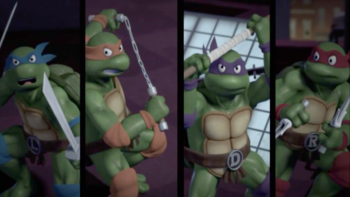 Alternate Universe counterparts of the Hamato Clan, this team of turtles originated from the 1987 series of the same name. 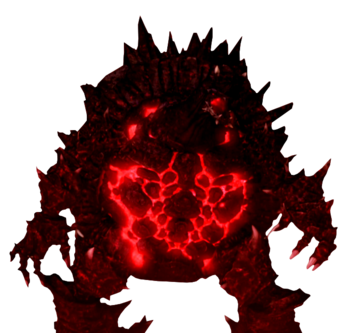 An alien tortoise who guards the final piece of the black hole fragment.

A pair of comic book superheroes Michelangelo and Casey Jones were fans of who were brought to life by the Aeon crystal. 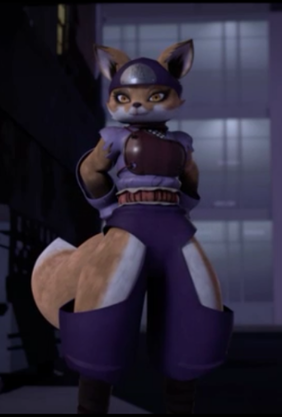 A mutant fox who was once a child mutated by the Kraang alongside Tiger Claw, her brother. After they escaped and became hunters, at some point she betrayed him. She is the one responsible for cutting off his tail. 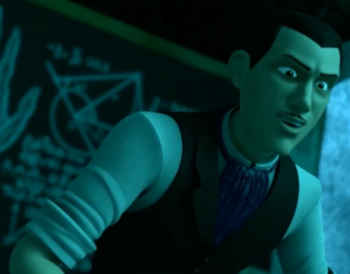 The creator of Frankenstein's Monster, whom the Turtles run into on a time traveling adventure. 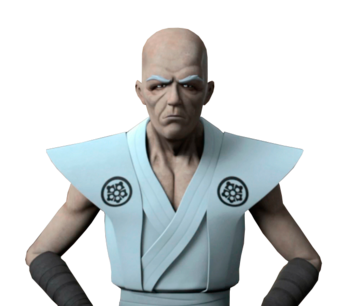 The leader of the Hamato Clan and Splinter/Hamato Yoshi's late father.