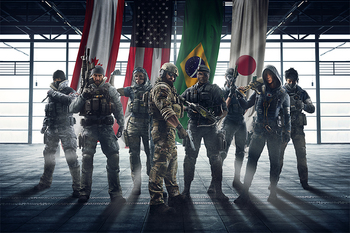 Back to character index.

A blunt pragmatist with a preference to simple mechanical devices, Buck's gadget is an underbarrel shotgun dubbed the Skeleton Key, used primarily to destroy walls and barricades.

A focused and meticulous trapper, Frost can deploy three Welcome Mats, essentially bear traps that incapacitate any enemy who step on them.

Driven by the discipline of the Navy SEALs and need to better himself, Blackbeard is equipped with two Rifle-Shields which he can attach to his primary weapon, each offering him 60 damage worth of headshot protection but slightly impacting his weapon handling.

A former Olympian hopeful whose dreams were brought to an abrupt end following a car crash, Valkyrie is equipped with three Gyro Cams known as Black Eyes, which can stick to any solid surface and can provide the Defenders with additional camera feeds.

A dedicated former hostage surrounded by hardship for most of life, Capitão is equipped with a Tactical Crossbow that can shoot either Asphyxiating Bolts that ignite the air upon impact or Micro Smoke Grenades that emit a cloud of blue smoke upon impact, identical in use to normal smoke grenades.

A ruthless interrogator with a criminal background, Caveira has a special technique dubbed the Silent Step, which allows her to dampen her footsteps by stepping so lightly not even Jackal's sophisticated Eyenox can track them. Alongside it is her signature pistol, the "Luison", a modified PRB92 equipped with a mineral-based suppressor and subsonic rounds. Her most dangerous technique is the ability to Interrogate an Attacker to reveal the rest of the enemy and their locations in real time for a few seconds.

She is among the first of Siege's operators to appear in another Tom Clancy game, appearing in a DLC mission in Ghost Recon Wildlands.

"Remember, it's not over until I blow it up. And even then."
Real Name: Yumiko Imagawa
Team: Attackers
Voiced By: Jamie Choi (Years 1-4), Laura Miyata (Year 5 onwards)

A natural team builder and highly adaptive individual, Hibana's gadget is the X-KAIROS launcher, which launches thermal breaching pellets that deploy on walls in two rows of three, and can be fired three times.

A brilliant but blunt, lazy and apathetic roboticist, Echo comes with two Yokai drones: high-tech hovering drones that can launch themselves in the sky and latch on a level roof. Once on the roof, they become invisible and serve as a camera for the entire defending team, and can also let out sonic bursts that disorient Attackers, with two shots maximum per drone and one recharged every 20 seconds.