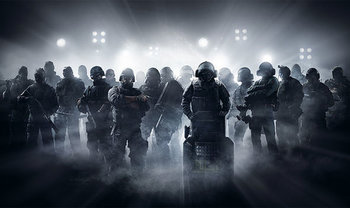 Back to character index.

A tall, imposing man and a natural leader, Sledge wields a giant Breaching Hammer called "The Caber", allowing him to breach walls, barricades and Castle's bulletproof barricades with speed.

"GPS satellites, unmanned drones, fucking laser sights? The more crutches you have, the more it hurts when they're kicked out from under ya. If there's one thing I know for sure, it's that a six inch blade never loses reception."
Real Name: Mike Baker
Team: Attackers
Voiced By: Jamie Muffett

An experienced, decisive veteran of three wars, Thatcher is equipped with EMP grenades that can destroy electronic gadgets in a wide radius.

"I know what you're wondering. 'What's in the canister?' I could tell ya, but then I'd have to kill you. Hehe. I'm only mucking about, relax. As for what's in the canister, it's best you don't ask."
Real Name: James Porter
Team: Defenders
Voiced By: Martin Sims

A loud-mouthed and aggressive thrill-seeker, Smoke is equipped with Gas Grenades filled with an "undisclosed substance" that he can throw and damage enemies (and teammates) with.

A young prodigy of a few words, Mute developed and has access to four Moni Signal Disruptors, which are used on the field to deny enemy electronics.

"When I was little, my savta taught me that 'Silence was a women's best garment'. But, I have to admit, I never really took her advice to heart."
Real Name: Eliza Cohen
Team: Attackers
Voiced By: Patricia Summersett

An impulsive and aggressive demolitions expert, Ash is an Israeli Operator transferred to US FBI SWAT in an exchange program, and is equipped with Breaching Rounds fired from a modified grenade launcher, allowing her to quickly breach through walls at a distance.

A disciplined and orderly former Marine, Thermite is equipped with two Brimstone BC-3 Exothermic Charges, allowing him to breach through reinforced metal walls.

A level-headed, empathic expert of defence and reinforcement, Castle is equipped with three UTP1-Universal Tactical Panels, armored barricades that he can deploy on windows and doorways.

A natural negotiator with a knack for noticing microscopic variances, Pulse is equipped with a special Heartbeat Sensor that can sense enemies through walls.

"If you have a few spare hours, I'd love to share the details of how this device is a masterpiece of design. Quadruple independent gearboxes enabling zero to twenty in under four seconds, ten kilometers of internal wiring, eleven hundred expertly machined hand-assembled components, flawless control at over 300 meters... But all my team needs to know is, 'Does it do the job, or doesn't it?' And let me tell you right now - it does the job."
Real Name: Emmanuelle Pichon
Team: Attackers
Voiced By: Brigitte Bourdeau

A Gentle Giant and long-serving member of the GIGN, Montagne brandishes an Extendable Shield known as "Le Roc" that can extend from normal size to offer full-body protection from the front, impervious to bullets as well as high resistance to explosive damage.

"I've learned from experience that the place to save lives is in the field, not an office. And sometimes the only way to save a life is to take one."
Real Name: Gustave Kateb
Team: Defenders
Voiced By: Alex Ivanovici

A genuine altruist and a prominent field medic, Doc uses a Stim Pistol in the field that he can heal or revive teammates and himself with. Each shot heals 40 health to a player, and any healing that went above 100 will be applied as a slowly-draining overheal with a maximum of 140 health.

"I trust that the ceramic trauma plate I'm wearing will stop a .357 Magnum round traveling at four-hundred and ninety meters per second. I trust myself not to move, not to flinch. I trust my teammates and they trust me."
Real Name: Julien Nizan
Team: Defenders
Voiced By: Marc-André Brunet

An idealist and highly focused individual, Rook comes equipped with a pack of R1N Rhino Armor, special plates that allow the wearer to survive a couple more bullets.

"Do you know what an artist and a sniper have in common? Details. Like when a touch of color is out of place. When a shadow does not match with its surroundings. Or when a shape is not where it is supposed to be. The only difference is the stakes. Mine are higher."
Real Name: Timur Glazkov
Team: Attackers
Voiced By: Michael Aranov

A patient and introspective sniper with a vibrant background as an artist, Glaz uses an HDS Flip Sight outfitted with a Thermal Feedback System, which allows him to both adapt for different range engagements and can outline his targets with ease. The gadget is mounted on his special armor-penetrating marksman rifle, the OTs-03, which can destroy barricades and walls, including Castle's Armor Panels with ease.

An expert tinkerer and craftsman with a gruff but strongly moral personality, Fuze comes equipped with three APM-9 "Matryoshkas", Cluster Charges that release five sub-grenades that can clean out an average-sized room with relative efficiency. Not recommended in Hostage Situations.

"These soldiers think their training will keep them alive. They break down doors and come through windows, weapons drawn. But it's too late. They forgot the first rule of survival. A real hunter always watches where he steps."
Real Name: Maxim Basuda
Team: Defenders
Voiced By: Victor Bevine

A pragmatic and avid hunter, Kapkan can deploy five Entry Denial Devices on doorways and windows, which are laser tripwire mines that damage any Attacker coming through them.

A joyous, if acerbic son of a Red Army family with a preference for Soviet-era weaponry, Tachanka comes equipped with his DP-28 Degtyarov Machine Gun, which is mounted on a heavy duty tripod and equipped with a specialised transparent ballistic shield to protect his head, courtesy of GEO Operator Mira.

"Do you think I have time to use the bathroom?"
Real Name: Elias Kötz
Team: Attackers
Voiced By: Christopher Domig

A rather jovial Operator, Blitz is equipped with the G52 Tactical Shield, a ballistic shield capable of blinding anyone facing the front.

An overachiever in both academia and law enforcement, IQ is equipped a special wrist-mounted detector, the RED Mk III "Spectre", which can detect electronic gadgets.

A creative, if arrogant, individual with a knack for complex machinery, Jäger can deploy an Active Defense System that destroys grenades and other projectiles with ease.

A former undercover in the Hannover Chapter of Hells Angels, Bandit can deploy four Crude Electrical Devices to electrify anything metal, shocking enemies, drones, and the thermal breaching gadgets of Thermite and Hibana.