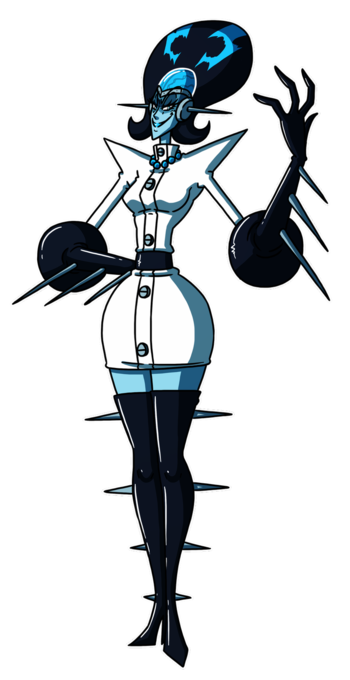 "I do love a good... dissection!"
Voiced by: Olivia Steele

The principal antagonist of the Dr. Crafty series, Dr. Mindstein is the diabolically depraved source behind the major events of the main story, starting with the end of Season 2's finale. Unlike Crafty himself, Mindstein plays the role of a Mad Scientist as straight as possible, and she proves it through her villainous experimental endeavors. She plans to one day gain access to powers that would help her create an unrivaled deity for the sake of scientific discovery, hoping to leave behind a legacy for herself, and refuses to cease planning until she finally achieves such a dream.

Worse still, Mindstein is the abusive mother of Nurse Worse and Screw. She harshly experimented on them both throughout their childhoods, even up to their early adulthoods. Because of her, the two sisters ultimately turned into the Frankenstein monster girls that they are today. Nurse thankfully escaped some time ago, but Screw wasn't so lucky. 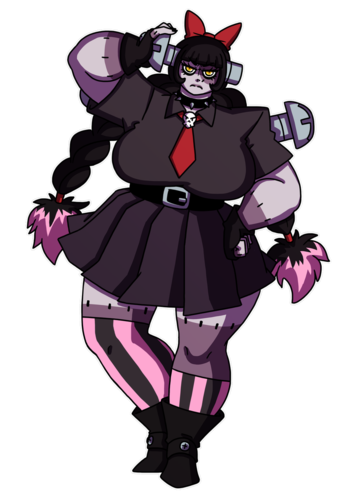 "You're not just in trouble... You're screwed."
Voiced by: VanityPride

Mindstein's younger daughter and right-hand assistant, Screw is a powerful Frankenstein monster girl who was introduced alongside Mindstein herself at the end of Season 2's finale, albeit as a silhouette. Unlike her older twin; Nurse Worse, Screw emotes very little and only seems to speak in a monotone manner. What she lacks in true emotion, however, she makes up for with high levels of raw strength and complete loyalty to Mindstein. This loyalty goes as far as having Screw address her mother as her "master" perpetually, although her true feelings towards Mindstein appear to be ambiguous. 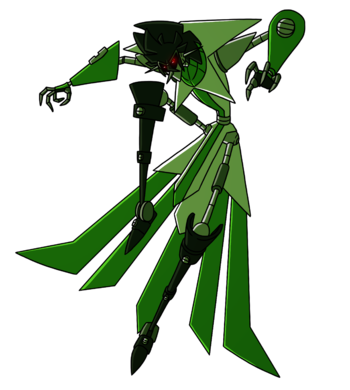 "Let's. Get. Crafty..."
Provoked by the Crafty Crew's dare in "We're Back! A Crafty Story," Mindstein sets Project: Eisen Schlau into motion. The result is yet another powerhouse in her ranks: Metal Crafty, a direct answer to the Crew's Sonic Month. This robotic duplicate of Crafty has been subjected to non-stop reruns of Crafty's show, so much so that he deeply loathes the crew and is out for their blood. Despite his murderous hatred, Metal bides his time throughout Sonic Month, acquiring data on every single member of the Crew to mimic their abilities for his own ends. He has a much more tempestuous relationship with Mindstein than Screw does, as he's unafraid to question her decisions and will even occasionally lash out if he doesn't get his way.

Metal Crafty was designed by ToxicSoul77 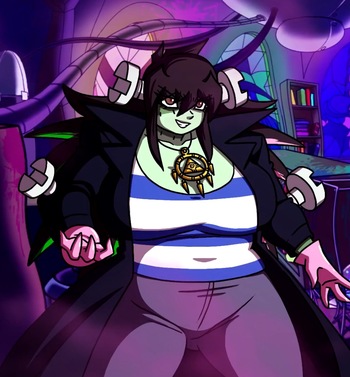 The main antagonist of "The Foreshadow Game," the Spirit of Yami Bakura (AKA Zorc) sends the Crafty Crew into the Shadow Realm. He also possesses Nurse Worse to bring her to the person who revived him: Dr. Mindstein. Before he can do so, Sasha intervenes, so Bakura decides to play a high-stakes Shadow Game with her to decide whether the Crafty Crew lives or remains trapped. 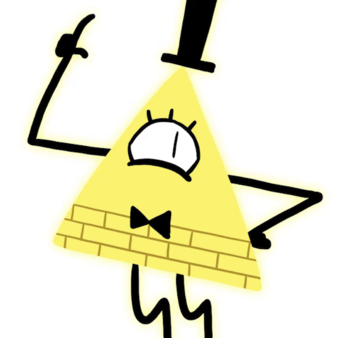 "Ahhhh... Maybe I don't need to go into his head, to get his secrets!"
Voiced by: Alex Rochon

During Cartoon Month, Mindstein reincarnates Bill Cipher and forces him to scout Crafty's mind for important secrets. If he finds what Mindstein is after, he is allowed to go free. However, he finds himself unable to infiltrate Crafty's head, so he instead takes interest in Nurse's.