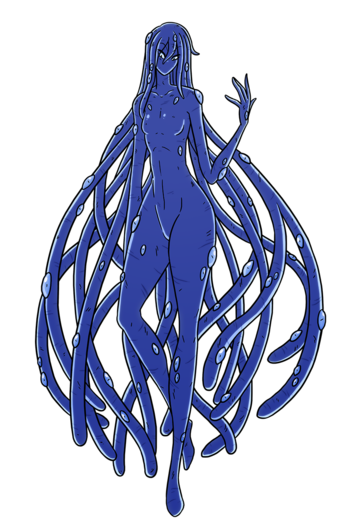 "Don't worry, I'm not going far away this time. I'll still be here when you're ready... When we're both ready."
Click to see her human form 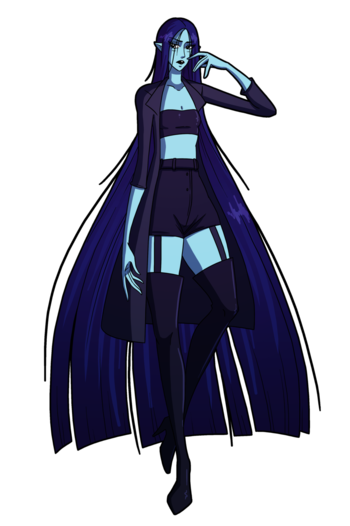 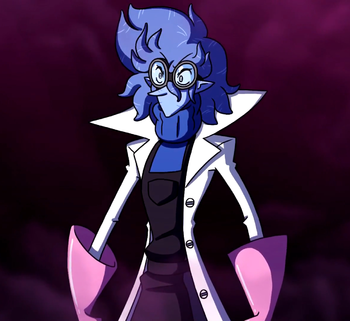 The last known Infinia alive, Sasha is a kind-hearted and curious woman who shows absolutely no mercy to those who threaten her loved ones. She is inextricably linked to Crafty's past, having saved him from his first suicide attempt then quickly growing to be his first love soon after. Unfortunately, the relationship wouldn't last; Sasha mysteriously disappeared one day, something she's regretted ever since for how deeply it affected Crafty. After "The Foreshadow Game," however, Sasha works up the courage to try and reconcile with him. Progress has been slow, but steady; she's imparted her essence onto Crafty, allowing some part of her to always watch over and protect him and his crew. However, that's all she's willing to do for now... 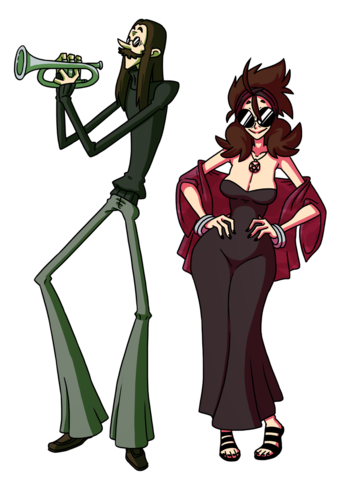 A duo of retired musicians, Howard and Vinny have been the most constant supportive presence in Crafty's life. They first appear in "This is Crack(ship)" during a flashback, where they happily take in Sasha when Crafty returns home with her. who were first seen on the show after he invited Sasha to live with them. According to "ENDGAME SPOILERS," the Craftersons always keep in touch after each episode. While they're a bit concerned about the antics that Crafty gets up to, they just as supportive of the show as they are for Crafty himself. 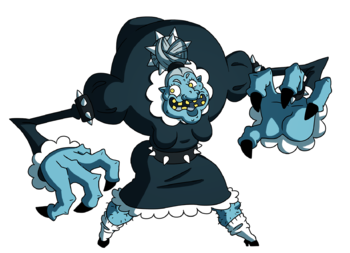 A brutish old woman, bizarre in her mannerisms and appearance, Disgustilda intends to enact revenge on Dr. Crafty and Take Over the World... even though she's not a noteworthy threat in any capacity. Even with her ineptitude, she still manages to sneak into the castle on a consistent basis, freely coming and going as she pleases when she isn't kicked out. Meanwhile, when not visiting the Crafty crew, she lives in a humble cottage close by, where she partakes in stereotypical old-lady activities. 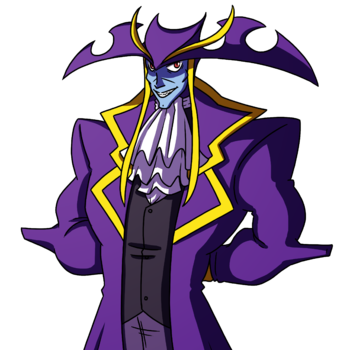 The Distressed Lord of Death of Darkstalkers fame has moved on from ruling Makai to establish a law firm in the Dr. Crafty universe: Jedah & Jedah Law Services. The quality of his services is inconsistent at best, but he still manages to find work from people across the multiverse. Crafty cons him with internet memes in "Street Frighters," and since then, Jedah typically only partners with Crafty for the sake of easy sponsorship for his business. Otherwise, Jedah uses any trick in the book he can to screw with Crafty, as long as it's legal. Meanwhile, he also has a history with Crystelle, with them being college exes that parted on less than amicable terms. 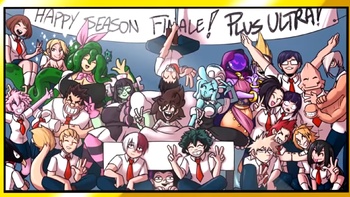 Mindstein sieges Dr. Crafty's castle in "Magic Kingdom Mania," and she removes Crafty himself thanks to Screw punching him skyward. As luck would have it, Crafty ends up landing just outside of U.A. High School, Japan's most prestigious school for heroes in the making. For the duration of Hero Month, he recruits the entirety of Class 1-A to help take his castle back. Despite some misunderstandings about whether Crafty is a villain or not, along with some small conflicts here and there, the class is very willing to help Crafty out.
Advertisement: