Literature / Welcome to the N.H.K. 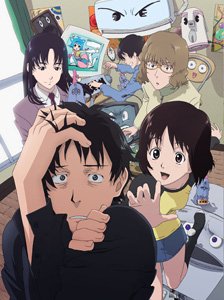 "It's a conspiracy!"
"Being alone is best. I mean, it’s true, isn’t it? In the end you’ll be absolutely alone; therefore, being alone is natural. If you accept that, nothing bad can happen. That’s why I shut myself away in my six-mat one-room apartment."
— Tatsuhiro Satou
Advertisement:

Welcome to the N.H.K. is an odd, darkly comic story about an anxiety-ridden hikikomori named Satou, struggling against his persistent delusion that he is being forced to be a hikikomori by a conspiracy called the N.H.K., until one day, when a girl by the name of Misaki comes out of the blue, insisting on helping Satou rid himself of his "hikikomori ways". The plot then follows Satou's many attempts (and repeated failures) to overcome his crippling anxiety. It's dark, it's funny, and even heartwarming at the most unexpected times.

Originally a novel written by Tatsuhiko Takimoto with illustrations by Yoshitoshi Abe and first published in 2002, it has been adapted to both a manga and an anime. The novel, manga, and anime are each rather different in both story and themes. The anime and manga follow essentially the same plot until the manga's divergence from the novel, leading to its own, separate conclusion. The novel tends to be somewhat darker, focusing more on the characters' issues and less on the love story, which is essentially the focus of the anime, with the manga somewhere in between. There are significant differences in the specific way some events happen in the anime and manga, even when they're otherwise almost identical, which tends to bring out the change in tone. Many events of the novel (the fight scene, the visit to the church) never occur in the anime or manga, and vice versa (the "summer vacation", the entire second half of the manga).