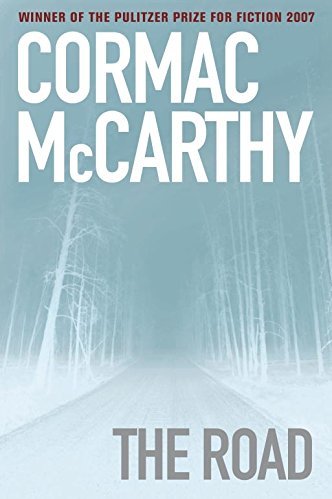 This. Gets. DIRE
"All Earth was but one thought — and that was death."
- Darkness,

Some time after an unspecified extinction-level global cataclysm, The Road follows two survivors—a man and his young son—who journey south through the ashes of a Post-Apocalyptic United States in the hope of finding enough food to avoid starving to death over the coming winter in a place warm enough that they won't die of exposure either. They have only the rags on their backs, a cart of scavenged food, a gun with two bullets, and one another. As they travel, they (and the reader) bear witness to a dead world where nothing grows, nothing lives, and the sun hasn't been seen in years. "Nothing lives" but refugees like them, wandering the country in search of food... and ever-hungry gangs of cannibals that stalk the roads.

The Road was published by Cormac McCarthy in 2006. It garnered critical praise in America and went on to win the Pulitzer Prize. The book is notable for a stark, minimalist style interspersed with occasional purple metaphors. The writing is idiomatic to say the least, eschewing most punctuation (including quotes) and occasionally including one-sentence chapters of philosophical musing.

Like most of McCarthy's books, it was optioned for a film, and The Film of the Book (Also called The Road) was released on November 25, 2009. It was directed by John Hillcoat, the director of The Proposition, starring Viggo Mortensen, Kodi Smit-McPhee, Charlize Theron and Guy Pearce. The score was done by Nick Cave and Warren Ellis (no, not that Warren Ellis).

See also Threads for another realistic depiction of life After the End.