Literature / Crest of the Stars 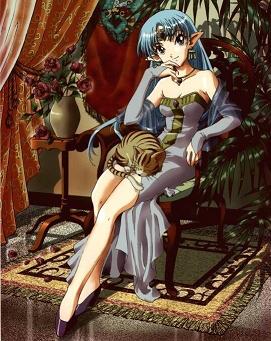 The main heroine being elegant.
Once upon a time there was a traveler crouching in pain by the roadside. A man who was walking by sat next to the traveler before he could ask for help. The man lectured the traveler at length about having a healthy lifestyle in order to avoid sickness. Satisfied with his speech the man stood up and left. His name is the United Mankind. Next, a very beautiful woman approached the traveler with an inquisitive look on her face. The traveler said, "Well, don't just stand there, help me." The woman replied, "Do you want me to help you?" She then discussed at length the situation with the traveler until she fully understood the problem. And then she nodded and left. Shortly after, the woman brought all the doctors, nurses, and staff of the closest hospitals with her. Her name is the Humankind Empire Abh.
— A political allegory from the planet of Midgrat
Advertisement:

The novels were adapted by Tokyopop (2006-2007) and J-Novel Club (2019-2022), with the latter including all main novels in the series (Crest I-III and Banner I - VI) with certain differences in approach to translation and overall tone of adaptation.

Additionally, there are two runs of Crest manga - Tokyopop release called Seikai Trilogy, adapting Crest, Banner I and Banner II, and long-runner by Yonemura Koichirou adapting Crest over 2012 - 2021 (via FlexComix). Tokyopop-version is linled to 1999 Sunrise anime and shares designs and overall approach to narrative, though English release is more careful with maintaining the original baronh terms, providing a glossary at the end, and Koichirou going after entirely different, over-the top detailed, art style, and is not officially localized.

Finally, there is a Japan-only PlayStation videogame released in the year 2000, set around the events of Banner I, which combines tactical ship-to-ship combat and visual novel.

Crest of the Stars follows the story of the two protagonists - Jinto (Jint in modern adaptations) and Lafiel (Lafier), as they get themselves involved in a war between two galactic superpowers - Abh Empire and the United Humankind. Jinto Linn is a young boy living on the planet Martine when one day his planet is visited by a massive fleet of the Humankind Empire of Abh. The Abh announce that they are annexing the system and demand the planet's immediate and unconditional surrender. After anxious deliberation Martine's president Rock Linn, Jinto's father, surrenders the planet without firing a shot. In exchange for their surrender Rock Linn is accepted into Abh society as a noble and his son is sent off to an Abh integration academy to learn the ways of the Abh.

Flash forward: Jinto has completed his initial education and is on his way to the Abh capital to begin his military training and an obligatory 10 years' service in the Abh navy. He will also meet his first Abh. That Abh is the Princess Lafiel, granddaughter of the Abh empress, who is herself in training and serving her military obligation as an Abh noble. They set off together on what is supposed to be an event-less courier mission to take Jinto to a military academy at the capitol. But then the brown stuff hits the fan and things begin going very bad very fast.

One of the most interesting conceits of the franchise is that, in basically any other kind of space opera, the imperialistic, militaristic Abh would be the unquestionable villains; and, indeed, at times when the bigger picture is put on prominent display it can be a bit uncomfortable to realize just what Jinto and Lafiel are a part of. In the latter Banner series, even the residents of Jinto's home planet want to know just why the hell he's loyal to the all-conquering Abh at all. A large part of the point of the show is a refusal to fall into easy stereotypes, however, and no side of the great conflict is black-and-white pantomime evil.

The franchise is known for its deep characterization, colorful characters, and ability to go into long conversations over very trivial matters without seeming bland (in the second series, two characters get into a surprisingly interesting conversion over wine). There is some action, but if that's the only reason you're watching this you'll be bored to tears. Overall it's quite an entertaining and memorable series, as long as you don't mind long stretches of talking heads.