Tabletop Game / C°ntinuum: roleplaying in The Yet
aka: Continuum 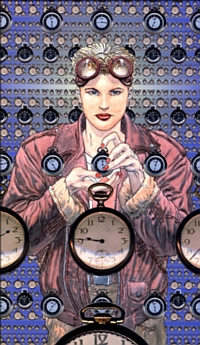 Hello. What time is it?

Ah, so you want me to describe Continuum here. You've picked the right chrony to frune with, then. I'll tell you what's what.

Cºntinuum: roleplaying in The Yet is a Time Travel Tabletop RPG by the folks at AetherCo

. It starts with the question, "If you could learn to span time at will, what sort of civilization would you be entering?" It moves on from there, and the results are very well thought out — but since it requires four-dimensional thinking, it can really mess with your head. This has led to some calling it "The best time-travel game you'll ever read, but never actually play."

Basically, all of human history leads up to us inventing time travel; this includes all of the time traveling going on before that, making sure history turns out right. That's the job of the Continuum: to keep history working smoothly.

If you'd like to join up, always remember to follow the Five Maxims. In particular, information is all; knowing too little or too much of your Yet (your subjective future) can bite you. When meeting yourself, always respect your Elders. Never let the levellers know what's going on. And never, never try to change the known. That's what the Narcissists do, and you don't want the Foxhorns after you.

Past that and the list of tropes below, well, the core rulebook and the GM guide have both been out of print for ten years, so further information is not available here.

Has nothing to do with Stargate: Continuum besides also being based on time travel. Not to be confused with the webcomic or the TV series of the same name.