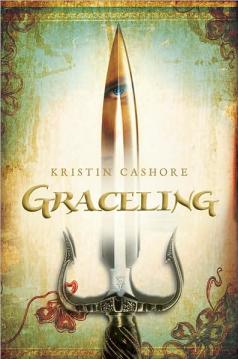 "Does it lighten the burden of your Grace, to know you have beautiful eyes?"

The Graceling Realm, or The Seven Kingdoms Trilogy, is a Young Adult fantasy trilogy by Kristin Cashore. It is set between the Seven Kingdoms, where people born with exceptional skills are known as "Gracelings" and feared, and the Dells, a land filled with deadly and beautiful beings referred to as "monsters".

The first book, Graceling, focuses on Katsa, who is Graced in killing and is forced to utilize her gift to do her uncle King Randa's dirty work. She long ago accepted she'd always be Randa's savage dog, hated and feared. But when she crosses paths with fellow Graceling Po she begins to reconsider that, and together they unravel a mystery that puts all seven kingdoms at risk.

Fire, the second book, a prequel set nearly forty years prior, is about the titular Fire, the last human monster in existence. With her monster status comes impossible beauty and the ability to read and control minds, as well as the legacy of her father, a true monster who nearly tore the Dells apart. Aware of her power, and afraid of it, Fire lives in a corner of the world away from people and temptation. Until the day comes when she is needed by her king, and Fire soon finds herself more entangled in the Dells political struggle than she could ever have imagined.

The last in the trilogy, Bitterblue, returns to the Seven Kingdoms, this time following Bitterblue from the second half of Graceling. Thirty-five years under the thumb of her cruel father and his terrifying Grace have left Monsea in shambles, and now Queen Bitterblue has to pick up the pieces. Her advisers believe they should pardon all of those who committed terrible acts during Leck's reign and forget every dark event that ever happened in that time. Monsea's past has become shrouded in mystery, and it's only when Bitterblue begins sneaking out of her castle to walk the streets of her own city at night, that she realizes the true state of her country. Her kingdom has been under the spell of a madman, and now their only chance to move forward is to revisit the past.

On April 25th, 2013, it was announced a film based on the first book is being developed.

Some entries are at the moment grievously incomplete, pending the final, official reports. The annalists cannot be held accountable for errors or omissions caused or required by others, of which there are doubtless many.